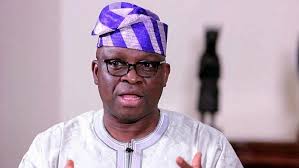 According to Fayose, Atiku wants to ultimately “bury the PDP,” according to Track News.

On Saturday, Fayose posted on his well-known Facebook page that “Atiku Abubakar came back to bury PDP after destroying the party in 2014.”

Atiku was a member of the All Progressives Congress, which was in opposition at the time, in 2014. (APC).

In announcing his departure from the APC in 2017, the former vice president claimed that the party “had failed and continues to fail our people.” He also charged the party of being arbitrary, violating the constitution, and showing contempt for party leaders.

A brutal policy of clampdowns on all forms of democracy within the party and the administration it created was instituted, he further blasted the fold for.

Related Topics:"Atiku intends to bury PDP" in 2023 The Fayose
Up Next