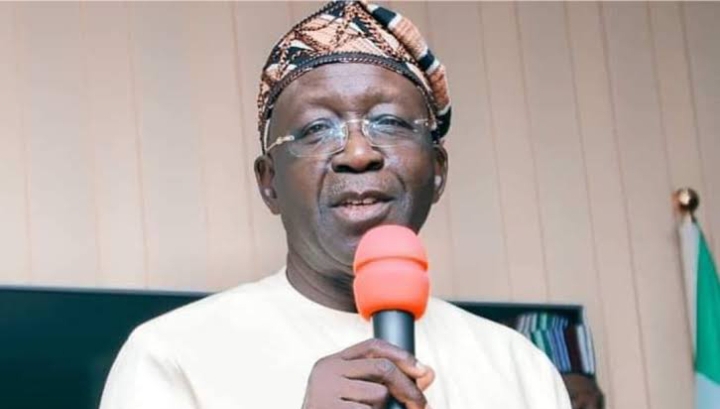 Senator Iyorchia Ayu, National Chairman of the Peoples Democratic Party (PDP), has stated his willingness to go to any length to restore peace to the main opposition party.
According to Track News, Governor Nyesom Wike’s supporters are demanding that Senator Ayu resign because northerners cannot hold all major positions in the PDP.

According to Wike’s camp, the PDP chairman displaced his bias when he described Sokoto State Governor Aminu Tambuwal as the “hero” of the party’s convention for stepping down for PDP presidential candidate Atiku Abubakar.

Senator Ayu made a condition for his resignation at a meeting called by the main opposition party’s Board of Trustees (BoT) if the stakeholders are adamant about his exit.

According to the PDP chairman, all members of the National Working Committee (NWC) from the South must swap places with those from the North.

His proposal was reportedly rejected by party stakeholders due to concerns that many of their loyalists in the NWC would lose their positions and influence.

Wike will lose because one of his allies, Senator Samuel Anyanwu of the South East zone, is currently the PDP National Secretary.

A member of the BOT told The Nation, “He told us that he was ready to step aside, but he should not be isolated.”

“He stated that because the presidential candidate is from the North, Northern officers in the NWC should swap positions with their Southern counterparts to ensure equity, fairness, and justice.”

“While Ayu’s agitation is politically plausible, it may disrupt the PDP’s zoning formula.”

“This is why some of our leaders argue that Ayu can only step down if Atiku is elected President.”

“Some of us believe Ayu should stay in office until after the elections.”

“There are concerns that Ayu will not resign if Atiku loses the presidential election.” This is another possibility.

“We don’t want another crisis within the party.” If the NWC’s roles are reversed, some of our leaders, including Wike, will suffer.

“The governor of Rivers State produced the party’s National Secretary and a few others on his own.” It means Wike will be further marginalized in the PDP power equation.”

Another BOT member stated, “We did not want any further split in the party over Ayu because it was obvious to us that if he is removed, the PDP will never be the same again.”

“We agreed to allow Ayu to stay in office until after the elections.”

“Some BOT members suggested that we pass a tactical vote of confidence in Ayu, which we did when some of our leaders addressed the press.”

“We are counting on Atiku and Wike to save the party’s fragile situation because they hold the aces.”