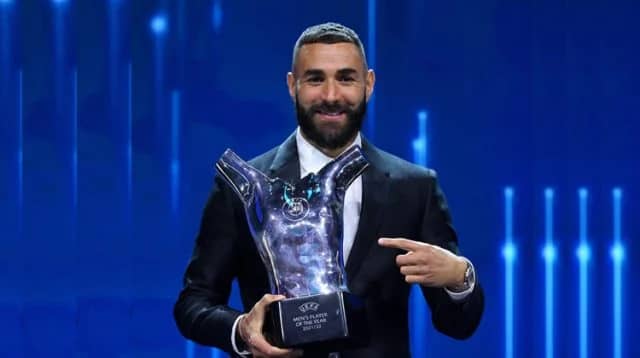 Karim Benzema was honored for his outstanding seasons by being awarded the UEFA Men’s Player of the Year at a ceremony on Thursday in Istanbul.

Karim Benzema, a striker from France who scored 15 goals during the tournament, was a key factor in Real Madrid’s victory over Liverpool in the Champions League final.

The 34-year-old scored hat-tricks in the Champions League knockout rounds against Paris Saint-Germain and Chelsea, as well as three goals over the course of two legs in the semifinal game against Manchester City.

After guiding England to a triumph at the Euros on home soil last month, Sarina Wiegman of the Netherlands took home the prize for best women’s coach. Because of his achievements with Real, Carlo Ancelotti was awarded best men’s coach.

Advertisement
Related Topics:Benzema wins the UEFA Player of the Year award.
Up Next

Osimhen, Bassey, and Sanusi fly the Nigerian flag at the UCL competition