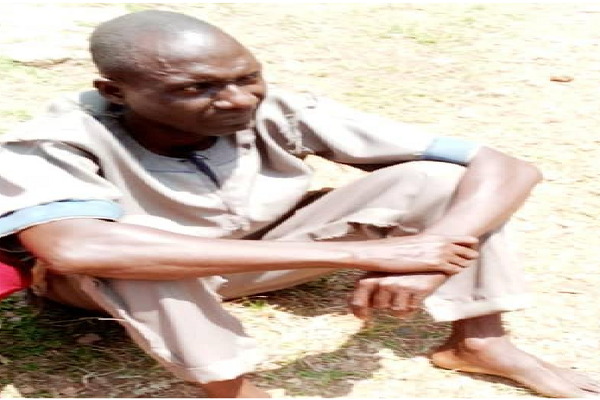 A 55-year old security guard, Arowolo Ayodeji, yesterday confessed that he had carnal knowledge of his 19 years old daughter twice.

But he blamed the devil for the act.

Ayodeji told our correspondent at the command headquarters of the Kwara State Nigeria Security and Civil Defence Corps (NSCDC), Ilorin.

The command paraded him alongside two others, Quadri Qudus and Emmanuel Sowole.

Qudari and Emmanuel were accused of stealing phones and burglary.

The alleged daughter molester, who said he hails from Ipoti Ekiti, Ekiti State, said that the marriage between him and the girl’s mother crashed when the girl was two years old.

When pressed to speak further, Ayodeji said the devil lured him to commit the crime.

“I have carnal knowledge of my daughter just twice. But I did not intentionally do it,” he said.

Parading the suspects, NSCDC spokesperson Olasunkanmi Ayeni said that “Arowolo Ayodeji’s report was brought to the notice of the command through the Kwara Sstate Ministry of Social Welfare. The ministry and the command’s Gender Unit are collaborating together.

“It was a good Samaritan that reported the case to the Ministry of Social Welfare before the case was brought here and the suspect was apprehended at Ijero-Ekiti.

“The man was said to have been molesting the girl while she was seven years old. It means that the crime had been one for two years running,” Mr. Ayeni said.

Speaking on other suspects, Ayeni said that Quadri stole 21 phones belonging to Joint Admissions and Matriculation Board (JAMB) students in Ilorin, the state capital on 5th of last month.

He said that Quadri Qudus “pretended to be selling facemasks at a JAMB examination centre and the students, out of trust, put the phones in his custody and he ran away with their phones. He was eventually caught by our men in Ilorin.”

Speaking with reporters, Qudus, 23, denied running away with the phones. He claimed that the phones were actually stolen from where he kept them.

“Out of fear of what would happen to me, I had to run for my dear life,” he added.

The NSCDC chief said that the 19 year old Emmanuel has been a serial house breaker. He said “his cases have been brought here several times and on different occasions he has been sent to remand, but he seems not to want to change from his act.

Related Topics:‘Devil pushed me to sleep with my 19-year old daughter’
Up Next