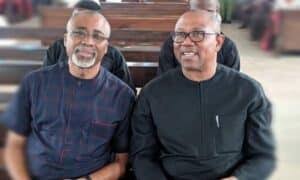 Former Senate Minority Leader Enyinnaya Abaribe has slammed those who have linked Labour Party presidential candidate Peter Obi to the Igbo presidency and the Biafra agitation.
According to Abaribe, such a move was a smear campaign aimed at de-marketing Obi.

He stressed that the former Anambra State governor should be seen as an individual pursuing his constitutionally-guaranteed rights.

According to Abaribe, critics should stop linking Obi to his tribe and religion.

He said:
”It’s unfortunate that Peter Obi’s emergence which is now a silver lining has come with complications. Tinubu has a presidential ticket, nobody is saying it’s a Yoruba ticket.

”Atiku has a ticket, nobody is saying it’s a Fulani ticket. But Peter Obi got a ticket and everybody is shouting: ’It’s Igbo presidency. Some even try to link him with the Biafra agitation.

”Have they tried to associate Tinubu with the Oduduwa self-determination agitation? Or Atiku within the Fulani herdsmen menace or the banditry in the North?”

questions raised by Wike during reconciliation meetings will be revealed.

2023 elections will be devoid of any ‘wuruwuru’, Buhari assures