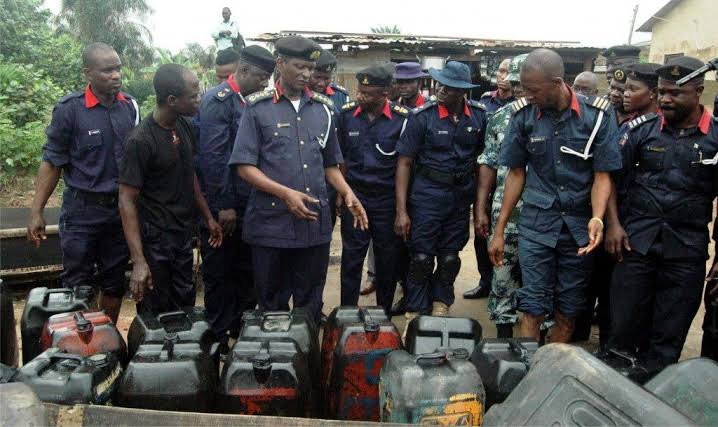 Dr. Ahmed Audi, the Commandant General of the Nigeria Security and Civil Defence Corps (NSCDC), bemoaned the fact that some of his soldiers had teamed up with criminal elements to vandalize oil pipelines and indulge in illicit oil bunkering.

It has been determined that illicit bunkering and oil theft are to blame for the nation’s declining oil revenues, which have almost destroyed the country’s economy and prevented it from meeting its OPEC production limit.

“You are all aware that one of the key missions of the Corps is the safeguarding of Critical National Assets and Infrastructure (CNAI), for which the Corps remains the lead agency,” Audi stated in an address to the heads of Anti-Vandalization units in the state commands of the Corps yesterday in Abuja.

In this regard, he stated, “the Corps is generally expected to effectively safeguard these infrastructure, which are very important to the socioeconomic development of the country, by guarding against oil theft/illegal oil bunkering while providing adequate security to oil pipelines, power and telecommunications facilities, among other critical national assets.

“However, it appears that some systemic aspects are acting to prevent the Corps from achieving the anticipated benefits from our efforts to abolish or drastically reduce incidents of oil theft/bunkering, oil pipeline damage, and other related crimes.

“The Corps Management has received reports of irresponsibility and complicity on the part of some of the Anti-Vandal Units, and as a result, it is imperative to call all heads of Anti-Vandal Units nationwide to this meeting to discuss this dangerous slide and rather unfortunate development, which the Management frowns at as it is inimical to the image of the Corps,” the summons read.

Let me unequivocally emphasize that the Corps Management will not tolerate any behavior that could cast doubt on the integrity of the Corps, he continued. The purpose of this meeting is to bring to your attention some of the observed flaws and gaps in the Anti-Vandal Squad’s activities as well as the necessity of completely reworking and restructuring the Anti-Vandal Units as a whole in order to reposition the unit for improved performance.

“You are required to exhibit a strong sense of responsibility, commitment, loyalty, and dedication to duty as heads of Anti-Vandal Units. Let me issue this caution that the Corps does not tolerate mediocrity, laziness, nonchalance, or incompetence and will not hesitate to deal with any officer who is deemed to be unsatisfactory in the performance of his duties.

“You must return to your various State Commands and step up your efforts to re-energize, re-engineer, and realign your various Anti Vandal Squads for better performance,” he demanded. “You must do this to justify the confidence reposed in the Corps by government and the good people of this great country.”

The Anti-Vandal Squad members “must re-dedicate themselves to our common mission and objective to curb and checkmate crime and eradicate incidents of oil theft/oil bunkering and vandalism of oil pipelines and other Critical National Assets and Infrastructure (CNAI),” he continued.

He stated that “the Management has started a covert inquiry into the operations of the Anti-Vandal Squads across the states, and any found responsible for any criminal connivance capable of harming the Corps’ reputation will be subject to severe sanctions to act as a deterrent.

“Let me further assure you that those who have demonstrated a high level of responsibility, dedication, competence, and commitment in the performance of their tasks will be appropriately rewarded through the reward system already put in place by the Corps’ Management.

All hands must be on deck as we work together to eradicate crime and criminality from society while collaborating with sister organizations to improve a safe and secure environment.

Related Topics:according to AudiNSCDC officials conspiring to vandalize oil pipelines
Up Next

On September 21, US court will sentence Hushpuppi.

EKSU’s resumption order is rejected by ASUU, and UNIOSUN takes on the union