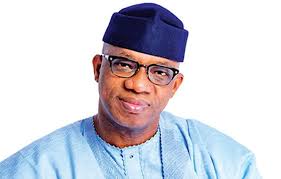 To make room for the growth of several road projects throughout the state, Ibikunle Amosun.

To lessen the agony of those impacted, Governor Dapo Abiodun has already approved that the compensation payment should start.
In order to widen several roads to up to 8 lanes, the immediately preceding administration destroyed various properties throughout the state without compensating the owners who were impacted.

It was also in danger because many of the roads were abandoned midway through construction while others never got going at all.
Ade Akinsanya, commissioner for works, stated over the weekend that the governor had approved the compensation payment, which will be made in stages.

The demolitions carried out by Amosun’s administration, according to Akinsanya, were needless and ended up making the issues the current government is currently facing worse.
He claimed that the state government now had to deal with billions in compensation claims in addition to searching for additional enormous quantities of money to finish the abandoned highways.

He mentioned that the Abiodun administration received a N202 billion debt from the Amosun administration for just roads.
According to the commissioner, the state administration decided to implement a policy that prohibited demolition in project implementation unless absolutely essential and unavoidable.

In order to prepare for the rehabilitation of the Kemta-Somorin route in Abeokuta, he claimed that the previous administration had designated several homes for demolition. Without any demolition, he continued, the project is almost finished.
“We attempt to avoid demolition with our road design and construction. Unless absolutely required, it is not necessary to demolish while building roadways.

“The same rule holds true for building bridges. The majority of the bridges built under that regime were wasteful uses of resources. For instance, the 19-kilometer Atan-Lusada-Agbara route has just one bridge along the entire stretch. The length is rather brief, he added.

Abiodun has received accolades for his involvement in the reparations procedure in the meantime.
Mr. Abayomi Olanreway, an Agbado resident who lost numerous stores to Amosun’s bulldozers, praised the governor for his generosity.
While regretting that the road had been abandoned for more than six years by the time the demolition took place, he chastised the previous administration for putting people through unjustified hardship.

Olanrewaju revealed that their road was better before the bulldozer moved in for the extensive devastation. He claimed that he relied on his shops to survive before the demolition.

Taiwo Adebari, a different local, also thanked the state administration and said that the compensation will assist to lessen some of their hardship.
The African Industries Group has said that it is willing to invest more than $500 million in the state.

Following a meeting with the governor in Abeokuta, the group’s chairman, Mr. Raj Gupta, revealed this information over the weekend in an interview with press reporters.
He claimed that the company, which primarily deals in steel and aluminum, was eager to expand its operations in the state.

Gupta stated that the company currently employs over 5,000 people and that he was impressed by the level of infrastructure development being undertaken in Ogun by the current administration.
“The state has a wide variety of sectors, and we are here to evaluate how we might increase our investment. Our collective investment in Ogun State exceeds $500 million, and we currently employ 5,000 people there.

Since our company deals with steel and aluminum, he stated, “I have to admit I was extremely impressed thus far with what we have observed as progress achieved by the present administration.”

Akeredolu to teachers: it’s crime to enrol your kids in private schools