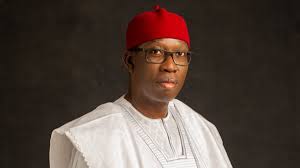 Prof. Epiphany Azinge has been congratulated on his appointment as President of the Commonwealth Secretariat Arbitral Tribunal, which is based in London, United Kingdom, by Delta State Governor and Peoples Democratic Party (PDP) vice presidential candidate Dr. Ifeanyi Okowa.

In light of Azinge’s illustrious academic and legal icon ancestors, Okowa characterized the nomination of the legal luminary from the Delta to the lofty post as well-deserved.

Speaking through his chief press secretary, Mr. Olisa Ifeajika, yesterday in Asaba, Okowa advised Azinge to use his extensive knowledge in his new position.
He was praised by the governor for his accomplishments as a distinguished “educated gentleman” in Nigeria and Africa.
Okowa wished Azinge well in his new role and expressed confidence that the new head of the Commonwealth tribunal will use his position to see that the CSAT’s goal was achieved.

“On behalf of the government and people of Delta, I extend my congratulations to our illustrious son, Professor Epiphany Azinge (SAN), on his nomination as President of the Commonwealth Secretariat Arbitral Tribunal,” the statement said in part.

I have no doubt that Prof. Azinge will use his abundance of expertise to improve activities at CSAT given his prior accomplishments as a clever and analytical lawyer.

Advertisement
Related Topics:Okowa congratulates Azinge on his appointment as president of the Commonwealth Tribunal
Up Next