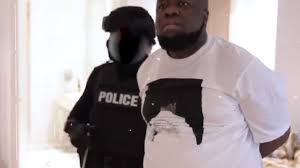 Ramon Abbas, better known as Hushpuppi, a Nigerian-born man, is scheduled to be sentenced for alleged global Internet fraud on September 21, 2022, according to the US Attorney’s Office for the Central District of California, Los Angeles.

After being rescheduled twice—from February 14 to July 11—the court has officially determined that the sentencing will take place on September 21.

Abbas would be subject to a statutory maximum penalty of 20 years in federal prison if found guilty of conspiring to engage in money laundering.

According to a press release from the Department of Justice’s U.S. Attorney’s Office for the Central District of California in July 2020 titled “Nigerian National Brought to U.S. to Face Charges of Conspiring to Launder Hundreds of Millions of Dollars from Cybercrime Schemes,” Abbas, a resident of Dubai who boasted about his lavish lifestyle on social media, arrived in the country to answer to criminal charges alleging he conspired to launder hundreds of millions

According to the statement, Nigerian national Abbas, 37, also known as “Ray Hushpuppi” and “Hush,” was detained and ejected from the United Arab Emirates (UAE) before arriving in Chicago. He first appeared in court in the United States in Chicago before being sent to Los Angeles.

Abbas was taken into custody by special agents of the FBI, who then took him to the country to face charges of conspiracy to participate in money laundering that were included in a criminal complaint that was submitted by federal prosecutors in Los Angeles.

Abbas, according to an affidavit included with the case, keeps social media accounts where he routinely posts pictures of himself wearing fancy clothing, sporting pricey watches, and posing in or around exotic cars and private jets. According to the FBI’s investigation, Abbas “finances this opulent lifestyle through crime, and is one of the leaders of a transnational network that facilitates computer intrusions, fraudulent schemes (including BEC schemes), and money laundering, targeting victims around the world in schemes designed to steal hundreds of millions of dollars.”

According to United States Attorney Nick Hanna, “BEC scams are one of the most challenging cybercrimes we confront because they often involve a coordinated group of con artists dispersed over the world who have experience with computer hacking and manipulating the global banking system.” This case centers on a prominent figure who allegedly provided safe havens for stolen funds all around the world while leading a vast, international conspiracy and leading a lavish lifestyle in another nation. As evidenced by this case, my agency will keep holding such offenders accountable, regardless of where they reside.

According to Paul Delacourt, the Assistant Director in Charge of the FBI’s Los Angeles Field Office, “In 2019, the FBI alone recorded $1.7 billion in losses by businesses and individuals victimized through business email compromise scams, the type of scheme Mr. Abbas is charged with running from abroad.” BEC scams are the most expensive kind of scheme reported to the FBI, despite the fact that this arrest has effectively taken a significant suspected BEC participant offline. I fervently implore anyone who moves money, whether it be for themselves or on behalf of a business, to educate yourself on BEC so they can spot this cunning plan before losing a substantial sum of money.

Related Topics:On September 21US court will sentence Hushpuppi.
Up Next

NSCDC officials conspiring to vandalize oil pipelines, according to Audi