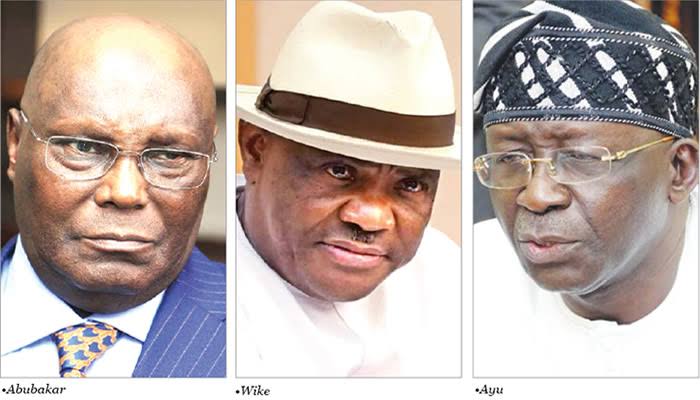 A Socio-Political Group codenamed “Benue Advocates for Good Governance” (BAGG), has thrown its weight behind the Peoples Democratic Party (PDP) National Chairman Dr. Iyorchia Ayu, saying those calling for his resignation are victims of their own ignorance.

While lauding Ayu’s courageous leadership, the Group opined that his decision to stay on as PDP National Chairman was “practical, courageous and constitutional.”

The Group made its position known in a Statement jointly issued by its National Coordinator, Hon. Terngu Aze, and its National Publicity Secretary, Hon. Taiyol Terhemba Abraham

The Group’s reaction emanated against the backdrop of calls by some party members on Ayu to resign because the presidential candidate of the party is from the North.

According to the Statement “We stand by the decision of the PDP National Chairman, Dr. Iyorchia Ayu, to stay on in office, its a decision that is borne out of courage, pragmatism and constitutionalism”

“In fact, we make bold to say those calling for his resignation are not only sponsored agents of destabilization, they are also victims of their own ignorance.

“Besides, how can you say you want peace, and you come to the table with preconditions”

They say Ayu must resign for them before they can discuss. Is that how to seek peace, the statement queried.

“The condition by Dr. Ayu to swap all positions of members of the National Working Committee (NWC) from the South with those from the North is a patrotic, selfless and informed one.”

The coordinator advised all camps “to eschew bitterness and be ready to make sacrifices in order to forge a common front to defeat the APC in the 2023 general election.”

The statement continued: “We should all consider the bigger issue of the current challenges of our dear country occasioned by the maladministration of the APC-led Federal government to close- ranks for us to rescue and rebuild Nigeria, 2023.

“This is not the time to fight internal wars or engage on ego trips, this is the time to organize ourselves and articulate position of our great party as well as the blueprints of our party for the buy-in of all Nigerians.”

The Group used the opportunity to congratulate the Ayu-led leadership for successfully conducting credible and transparent national convention/ presidential primary.

The Socio-political group expressed confidence in the leadership capacity of Atiku Abubakar and his ability to turn things around when he takes over Come May 29, 2023.

Kaita: PDP Doesn’t Need to Campaign to Win in 2023 Elections