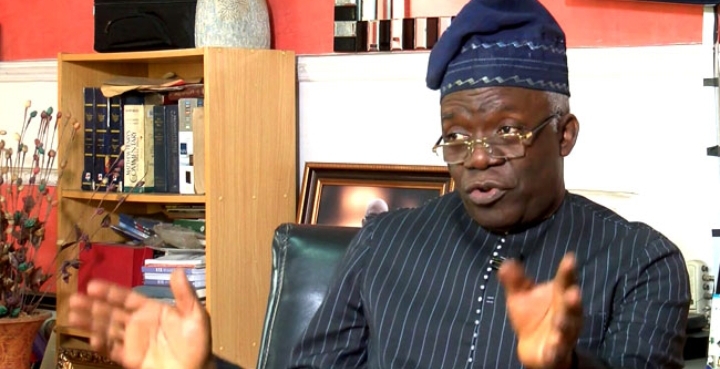 Femi Falana (SAN), a strong human rights lawyer and vibrant Nigerian lawyer has accused the government of President Muhammadu Buhari of “failing to satisfactorily address the crisis of insecurity in the country, and doing nothing to end the mismanagement of the economy under his watch.”

Falana made this known in a paper themed Good Governance or Misgovernance: The Contract Called Democracy, and delivered yesterday at the 50th anniversary interactive session held by the Abeokuta Club in Abeokuta, Ogun State.

The legal practitioner stated: “In spite of the decentralisation of police powers at the centre the Federal Government has continued to kick against the creation of state police service on the ground that it is unconstitutional!”

“No doubt, based on the virtual collapse of the security architecture of the neocolonial State, the Federal Government has grudgingly allowed state government to create state or regional security outfits. But they are not allowed to bear arms.”

In his words: “The personnel of the regional security outfits who are armed with cutlasses and dane guns are expected to commit suicide by confronting AK 47 bearing terrorists, bandits, kidnappers, herders and robbers.”

Falana added: “In view of the fact that the civilian Joint Task Force operatives are given licences to bear arms and ammunition, I have asked state governments to sue the Federal Government for refusing to grant licences to the personnel of regional security outfits for allowing dangerous criminals to breach the constitutional rights of unarmed citizens to life and dignity.”

“Furthermore, it is discriminatory to deny licences to 5,000 state security personnel to bear arms to protect millions of unarmed citizens while a few individuals are granted licences to acquire weapons to protect themselves and their family members.”

The paper reads in part: “Curiously, some state governors have also complained about the refusal of the National Security Adviser to approve the applications for End Users Certificates for importation of Drones to monitor and expose terrorists and kidnappers hiding in the forests.”

“With respect, such sabotage of security ought to be challenged in the Federal High Court as the National Security Adviser has not been conferred with the power by any law to grant or reject the requests of governors to acquire equipment to secure the areas that have been exposed to danger by the Federal Government.”

“The governors should have directed the requests to the President Buhari who has publicly challenged them to adopt all necessary measures to secure the states since he has asked them to stop rushing to the Villa to complain about insecurity or killings by criminal gangs.”

“Therefore, the executive should submit a supplementary money bill to the National Assembly for the funding of the police since it is the constitutional duty of the police to maintain law and order in the country.”

“It is common knowledge that the wealth with which the democratic process is sabotaged by members of the ruling class has been traced to the coffers of the government.”

“A public officer and his cronies have just been charged with the criminal diversion of N109 billion from the Federation Account and bribes received from Governors, Finance Commissioners and heads of parastatals who had to jump the queue that was artificially erected in the office of the Accountant-General of the Federation.”

“I am also aware that the sum of N4.5 billion has just been found in the bank account of the Surveyor-General of Ogun State.”

The lawyer argued: “It is not in doubt that misgovernance has replaced good governance in Nigeria while majority of public officers have breached the contract called democracy.”

“Since the acquisition of security equipment alone cannot guarantee peace, law and order the Constitution has prescribed that the security and welfare of the people shall be the primary purpose of government.”

“As part of the fundamental objectives of the neocolonial State the participation of the people in their government is guaranteed in accordance with the provisions of the Constitution and the Electoral Act. The implication is that elected officials are mandatorily required to have their mandate renewed periodically through fair and free elections.”

Falana maintained: “Nigeria is said to be a State that is based on the principles of democracy and social justice, the federal, state and local governments are under a legal obligation to promote the happiness, freedom and prosperity of the people. But in view of the monetisation of the electoral process by the political class, Nigeria cannot be said to be a democratic society.”

“It has become a plutocratic society where only the few rich people can contest and win elections. In other words, democracy is no longer a government of the people but a government of a few rich and powerful individuals.”

“A situation whereby corruption is fought, even though partially, by the Federal Government alone should stop.”

“In view of the duty imposed on the State by section 15(5) of the Constitution to ‘abolish all corrupt practices and abuse of power’, the authorities of the 36 state governments and the Federal Capital Territory should establish anti graft agencies to fight the menace of corruption, recover looted fund and prosecute indicted individuals, groups and organisations.”

“In addition to the recovery of looted public fund from all criminal elements, serving l and retired public officers who wish to contest elections should be thoroughly investigated. Those who betrayed the public trust by looting the treasury should not be allowed to pollute the electoral process with stolen money.”

“Nigerians must stop the dangerous culture of of “Owo Abu lafi se Abu lejo” (we used Abu’s money to entertain Abu as a visitor).”

“The National Economic Council (NEC) established pursuant to section 153(1) and Paragraphs 18 & 19 of Part I of the Third Schedule to the Constitution has the mandate to ‘advise the President concerning the economic affairs of the Federation, and in particular on measures necessary for the coordination of the economic planning efforts or economic programmes of the various Governments of the Federation.’”

“The National Economic Council chaired by the Vice- President is comprised of the Governor of each state of the Federation and the Governor of the Central Bank of Nigeria.”

“Notwithstanding the establishment of the NEC by the Constitution, successive regimes have ignored its advice. They prefer to rely on the advice of the Presidential Economic Council on the one hand and the International Monetary Fund and the World Bank on the other.”

“As a matter of fact, the Government has swallowed hook, line and sinker the neoliberal economic policies dictated by the Bretton Wood institutions. Even though such policies have turned Nigeria into the headquarters of global poverty the Federal Government has not plucked up the courage to abandon them in the interest of the national economy.”

“I wish to submit without any fear of contradiction that the economic policies of the Government are in conflict with section 16 (3)(d) of the Constitution which provides that the State shall ensure that ‘suitable and adequate shelter, suitable and adequate food, reasonable national minimum living wage, old age care and pensions, and unemployment, sick benefits and welfare of the disabled are provided for all citizens.’”

“To guarantee adequate resources to meet the basic responsibilities of the Government the Constitutional has prohibited the concentration of wealth or the means of production and exchange in the hands of a few people or of a group.”

“It is crystal clear that the economy will soon enter into another recession due to unprecedented importation of fuel and other goods from western countries and China, grand corruption, dollarisation of the economy and implementation of neoliberal economic policies the Nigerian economy.”

“The mismanagement of the economy has been confirmed by top officials of the Buhari administration. While the Comptroller-General of Costoms, Colonel Hamid Ali has accused the Nigerian National Petroleum Corporation and Directorate of Petroleum Resources of involvement in the smuggling of fuel into neighbouring countries the Governor of the Central Bank of Nigeria, Mr. Godwin Emefiele has blamed the NNPC for not remitting dollars into the Federation Account.”

“Whereas the sum of N443 billion was provided for fuel subsidy in the 2022 budget the National Assembly has passed the supplementary budget which increased the fund to N4 trillion. Based on the massive devaluation of the Naira through dollarisation the Minister of Finance, Mrs Zainab Ahmed has disclosed that fuel subsidy may gulp N6.5 trillion this year.”

“Meanwhile, the NNPC has been unbundled in accordance with the provisions of the Petroleum Industry Act. But President Buhari has singlehandedly reorganised the oil and gas industry by appointing the members of the Boards of the NNPC and the new companies.”

“In the light of the foregoing, it is suggested that the Nigeria Governors Forum (NGF) and the Association of Local Governments of Nigeria (ALGON) should demand for urgent review of the Petroleum Industry Act to ensure the joint management of the natural resources of the nation which has been vested in the Government of the Federation by section 44(3) of the Nigerian Constitution.”

“It is indisputable that the monetary policies of the CBN under his watch have ruined the economy while he has failed to resolve the conflict of interest arising from his membership of the ruling party. The CBN should be run by professionals of integrity and supervised by a Board constituted by the representatives of the Federal, State and Local Governments,” he said.

Related Topics:REVEALED: "How Buhari Is ‘Failing’ To Address Security Crisis" - Falana
Up Next

In contrast to Osinbajo, Oshiomhole stated that Tinubu could not be held accountable Buhari administration.