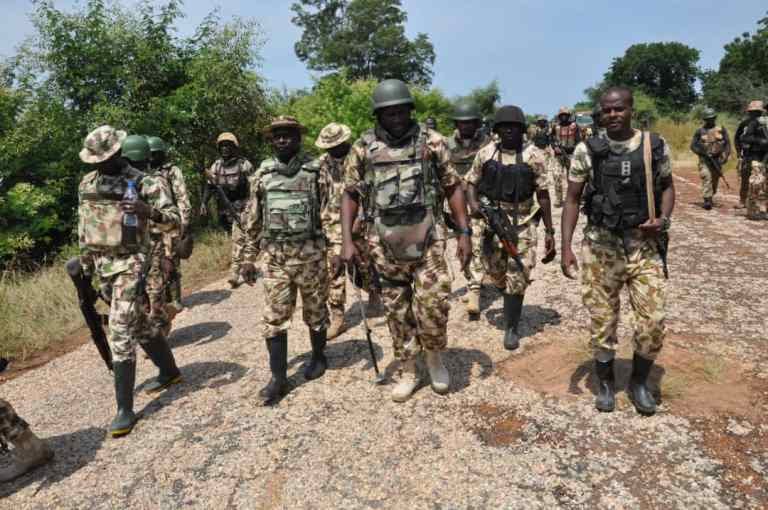 During a search on terrorist hideouts in the Federal Capital Territory, eight people were taken into custody (FCT).
According to Track News, Musa Danmadami, the Defence Headquarters’ spokesperson, revealed the information on Thursday in Abuja at a biweekly press conference.

He said that the militants’ hideouts at Deidei Abattoir in the Abuja Municipal Area Council and in Gwagwalada Area Council in the Federal Capital Territory (FCT) were raided by Nigerian Army Guardsmen.

Danmadami stated that the hideouts were raided on August 13 and that three pump action rifles and five AK47 rifles were found. He said that several goods, including three machetes, knives, and substantial quantities of materials thought to be cannabis sativa, were also found.

Eight suspected terrorists were detained during the raid operation, and five AK-47 weapons, three pump action shotguns, a huge quantity of materials thought to be cannabis sativa, three machetes, and other items were also found.

According to Danmadami, troops of operation Whirl Punch working in the north-central region have maintained their momentum in order to deny terrorists freedom of movement within their shared operational zone.

He continued by saying that Naziru Mohammed, a wanted gunrunner, was also apprehended at the Murtala Mohammed Bridge in the Koton Karfe Local Government Area of Kogi State.

One tricycle, one motorcycle, two mobile phones, 1,000 rounds of 7.62mm ammunition, and a significant amount of cash were among the things found during the operation, according to Danmadami.

He also said that the appropriate authorities have received all recovered materials for further action.

Accordingly, from August 13 to August 18, 2022, the air component of Operation Whirl Punch carried out air interdiction operations against the terrorist stronghold of Kurebe in the Shiroro Local Government Area of Niger State.

Reports indicate that several of the terrorists were neutralized as a result of the airstrikes on the militants who had gathered for a conference hosted by infamous terrorist leader Aminu Duniya.

Additionally, between August 14 and August 18, 2022, soldiers of Operation Whirl Stroke, working with the Department of State Service, carried out raids on bandit hideouts in the following locations: Ankya Village, ZakiBiam Town in the Ukum Local Government Area, Mahaga Community in the Logo Local Government Area of Benue State, and Jamata in the KotonKarfe Local Government Area of Kogi State. Timothy Nwagaga (also known as Ambiju), a notorious bandit, was captured during the operation in the Benue State village of Zaki Biam. The suspect’s affiliation with the notorious bandit known as Anhie (also known as short man), who has been on the military’s wanted list, was made public.

Related Topics:eight suspects are detained.Troops raid terrorist hideouts in Abuja
Up Next

2023: Be Fair To All Parties, Gov Diri Tells Bayelsa Monarchs