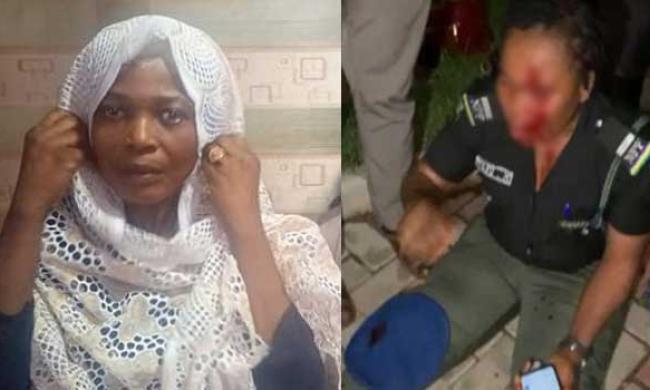 The Nigeria Police Force on Wednesday announced that the offenders have been arrested, including Duke Abiola.

Inspector Teju Moses, the policewoman who was assaulted by Professor Zainab Duke Abiola on Tuesday has revealed what happened between her and the legal practitioner.

The Nigeria Police Force on Wednesday announced that the offenders have been arrested, including Duke Abiola.

According to FIJ, the police officer said her awful experience with Mrs Abiola did not start the day she was molested.

She said, “I am Inspector Teju Moses, attached to Professor Dike Zainab around Area 11. Yesterday, after I helped her take her things to the car, she told me to open the gate. But I told her that I could not open the gate because it was raining and I was in uniform.

“She told me to go assist a staff to open the gate but I repeated the fact that I was in uniform and it was raining. She then said that why would I answer her that way, that it was a query, in her words. So, I kept quiet.

“When we got to the court, she told me to take all the papers handed to me and ensure I signed them. I told her that I could not sign the papers because I didn’t know what they contained. She insisted that her previous police orderlies did what she asked without questioning her. She then started to insult me on the court premises and said that she could call the Inspector General of Police to get her a new orderly.”

Moses reported that Abiola claimed to know the IGP’s wife and informed her that she could treat her as she liked. As they headed back to her house, the taunts persisted, according to Moses.

“The next morning, she told me to bring all the carpets in the car to clean them. I explained to her that I could not do so because I was in uniform. She asked why I was so stubborn. ‘I looked at your face and you looked gentle,’ she said to me.

“She continued to say that she would deal with me. ‘I have dealt with high-ranking officers. I can remove your uniform at any time. I mark your exams,’ she said. She also said that my dirty boots stained her car and went on with the insults,” Moses said.

Moses claimed that after Abiola reported her to her local police station, she received advice from them not to drive with the professor in the car.

“I went to her house to get my bag when I met her at the gate. She was holding a piece of iron and said that she was going to make sure I was stripped of my uniform. ‘You this witch, you think you are stubborn?’ she said.

“She did not allow me to enter the house or retrieve my bag. Instead, she instructed her maid and one other male staffer to beat me up. She threatened the maid that she was going to hit her if the maid failed to hit me. They chased me around and hit me with that metal bar that looked like a crowbar,” Moses said.

Moses said she called out for assistance, and passersby rushed to her aid.

Preliminary investigations, according to the Force Public Relations Officer, Muyiwa Adejobi, have revealed that Abiola and her domestic staffer were guilty.

Related Topics:I Was BrutalisedInsulted For Refusing To Clean CarpetsOpen Gate In Police Uniform—Nigerian Policewoman Brutalised By Professor Duke Abiola
Up Next