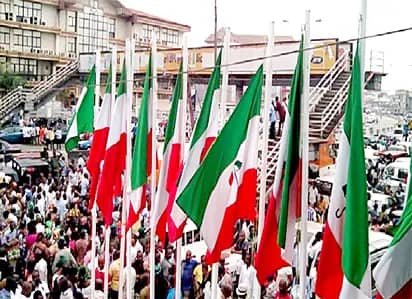 The Peoples Democratic Party (PDP) House of Assembly candidates in Ekiti State have urged on party leaders in the state to unite ahead of the 2023 general election.

The candidates, who stated through a mutually signed communique following the party’s meeting in Ado-Ekiti, said the gathering of all party officials became imperative to prevent further division of the party in the state ahead of the next year’s election.

While declaring support for the party’s presidential candidate, Atiku Abubakar, the candidates highlighted that there was a need for leaders across the state to unite and put the interests of the party and the candidates above their individual goals and ambitions.

They decried public attacks on leaders by feuding members, adding that “all party leaders should work out the best means to address internal disputes rather than using foul language, divisiveness, and display of power.”

According to the statement, “the unwarranted rancor in the party is condemnable and should cease immediately in the benefit of all members.”

“In the interest of the party, the people of Ekiti, and Nigeria, members of the PDP in the state should immediately cease fire and sheath their swords.” HE Ayodele Fayose, Rt Hon Tunji Odeyemi, Senator Biodun Olujimi, HE Olusola Eleka, Dr Sikiru Tae Lawal, Otunba Bisi Kolawole, and other eminent leaders in the state should collaborate peacefully in the best interests of the party, its 2023 candidates, and the suffering masses.

“To avert political chaos, the party’s lawfully recognized leadership hierarchy should be upheld in accordance with the party’s constitutional provisions and judicial judgements.”

“The PDP’s National Working Committee should act urgently on the Ekiti State chapter of the party to avert further split and bandwagon effect in future elections.”

“As seen during the 2019 House of Assembly election, the NWC and other important leaders in the state should not abandon Assembly candidates in the state to their fate.”

“The House of Assembly Candidates are accountable to God (Our Creator), Conscience (Our Guild), and the Party (Our Sponsor), not to individuals.”

Metuh: Atiku under pressure to defeat Wike and loyalist candidates

2023: I’ve better qualifications and track record than my rivals – Tinubu.