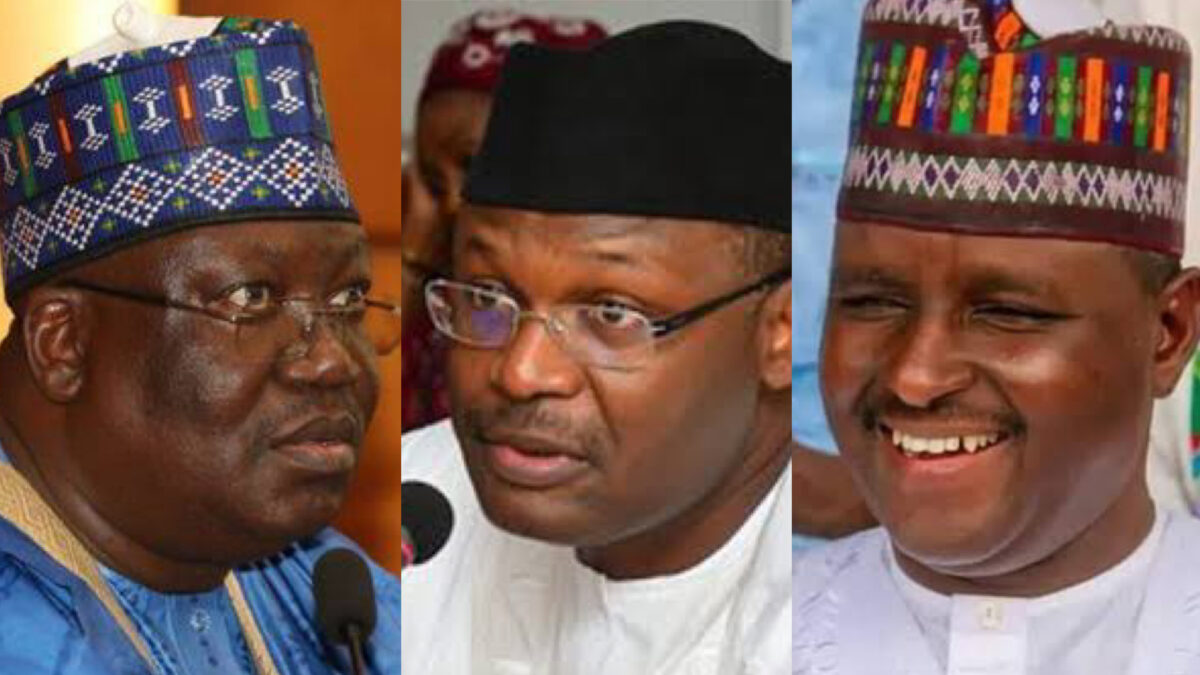 The Independent National Electoral Commission (INEC) has backtracked on its earlier position of affirming Bashir Machina as the “true winner” of the governing All Progressives Congress (APC) primary for the Yobe North Senatorial District.

The electoral office has now falsely claimed before a federal court that Mr Machina’s victory was not sanctioned by the appropriate body of the ruling party. INEC had earlier in its certified true copy report, declared Mr Machina, the winner of the primary election held on May 28, 2022, after he scored 289 votes out of 300 delegates.

In the same document, certified by the electoral body on June 23, 2022, INEC did not list the incumbent Senate President Ahmad Lawan as having participated in the exercise at all. 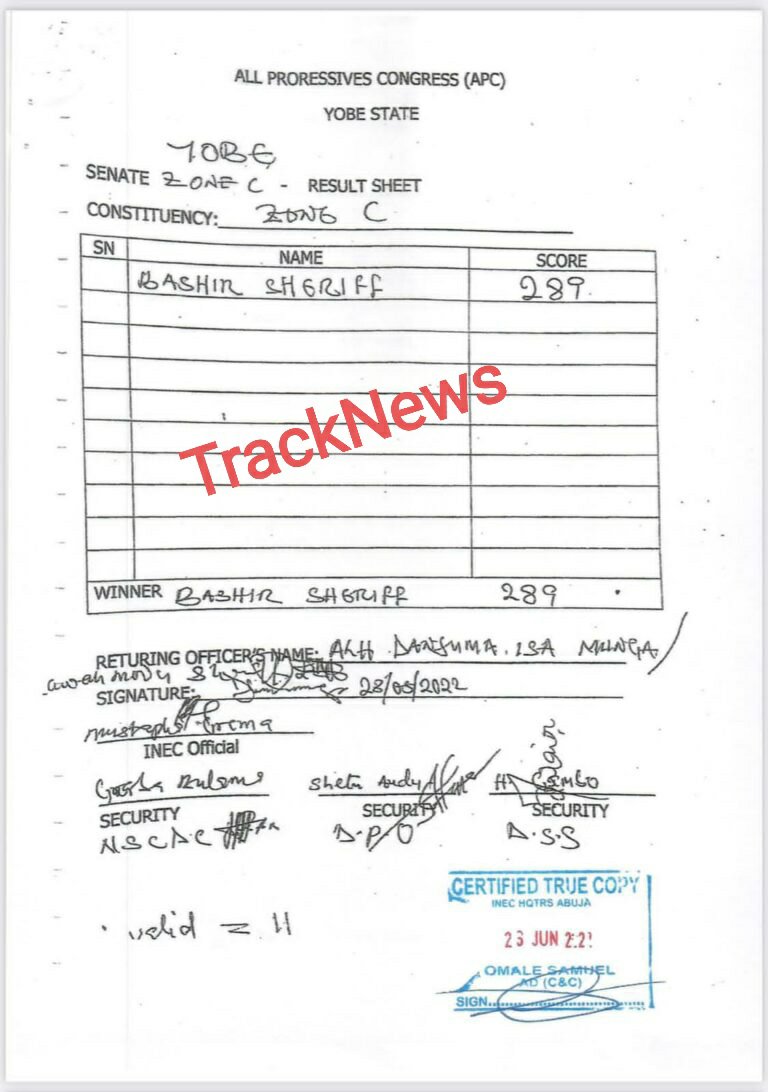 The June primary was conducted by Danjuma Isa Munga, who is one of the five-man primary election committee set up by the party’s national leadership to conduct the Yobe Senatorial District election.

In an Affidavit before the Federal High Court in Damaturu, Yobe state, dated August 11, 2022, Mohammed Ayuba, an assistant executive officer in the Litigation and Prosecution Department of INEC, claimed that the primary election which Mr Marchina held on to, was not the one organised by the national leadership of the APC for the Yobe North Senatorial District. 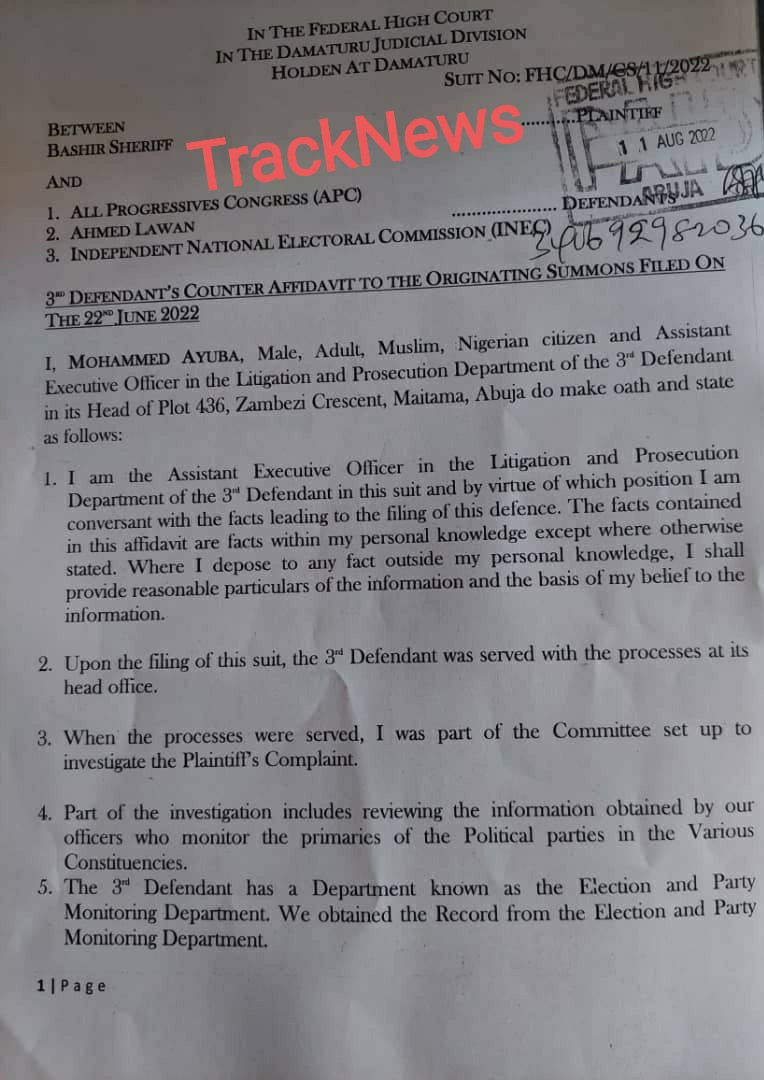 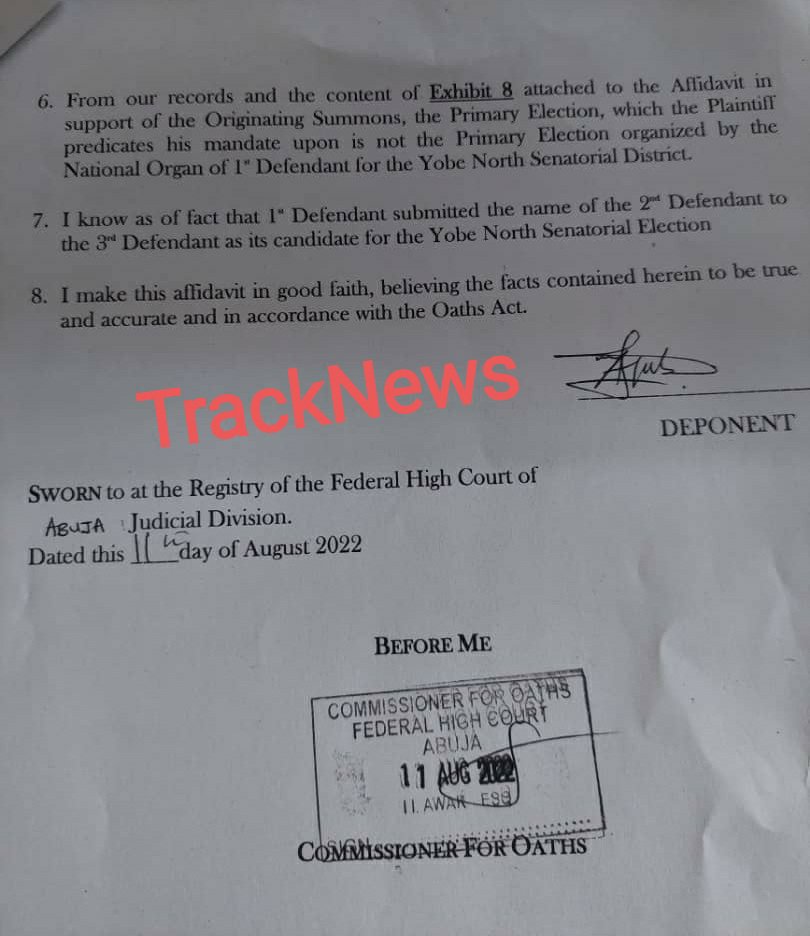 In the document seen by TrackNews Nigeria on Tuesday Mr Ayuba said on oath that the APC submitted Mr Lawan as its candidate for the Yobe North Senatorial District.

The claim of Mr Ayuba in the Affidavit deposed before the court was in an attempt to sabotage Mr Machina, who had earlier in June, been affirmed by the same electoral body as the winner of the APC primary for the Yobe North Senatorial District.

Mr Ayuba’s testimony also contradicted the July 10 statement of INEC that it had concluded its role by certifying Mr Machina as winner and the politician should approach the court to enforce his mandate.

In a further attempt to scuffle Mr Machina’s victory, the APC is recognising Mr Lawan as the candidate of the party for the senatorial election slated for February 2023.

Mr Lawan has been making attempts to hijack the senatorial ticket from Mr Machina, after losing out on the presidential primary at its convention, held on June 8, 2022, in collusion with Abdullahi Adamu, the party’s national chairman. 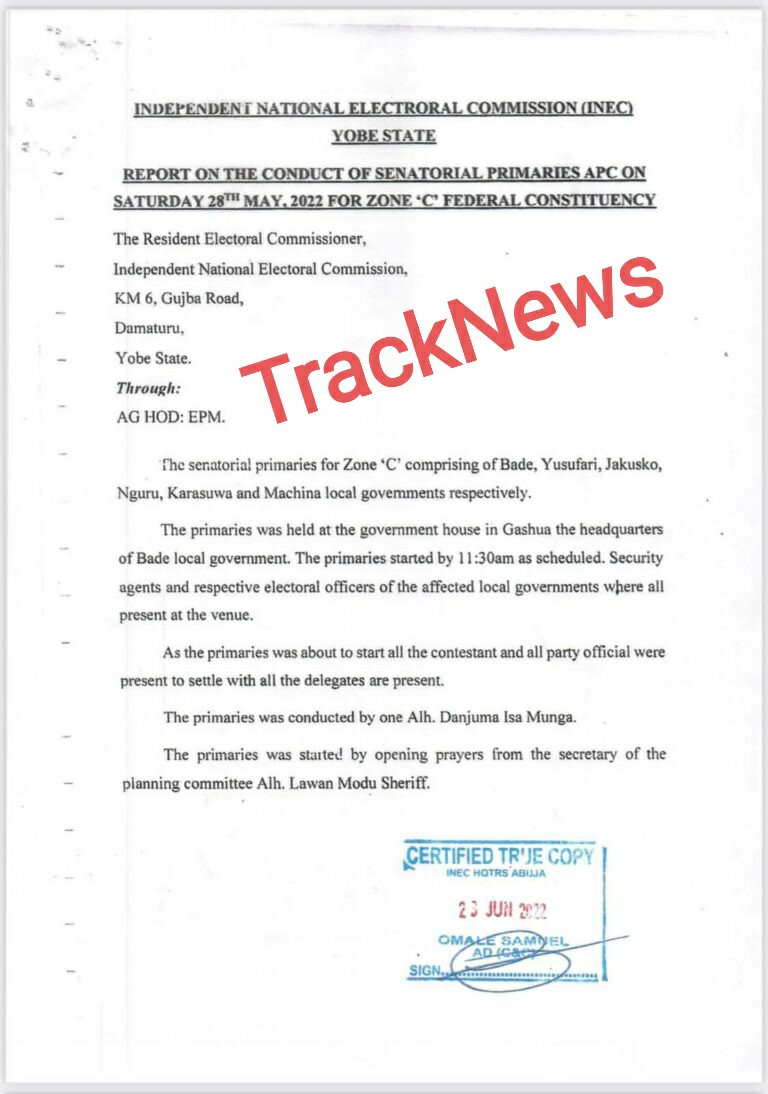 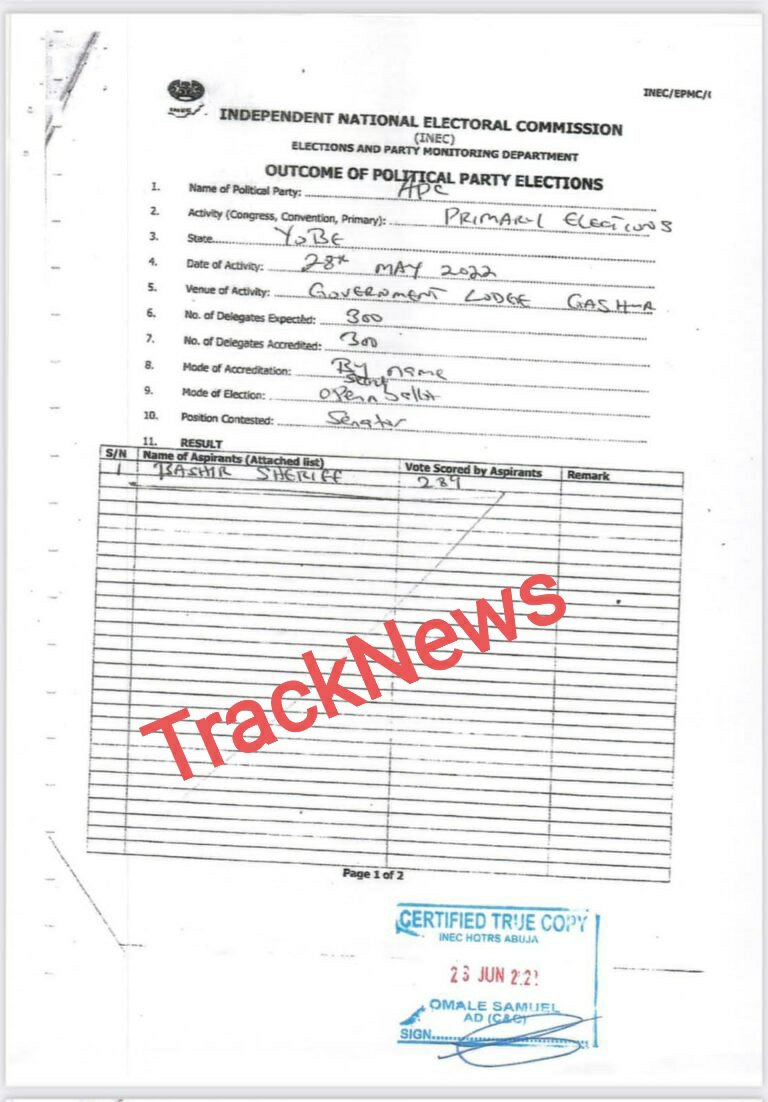 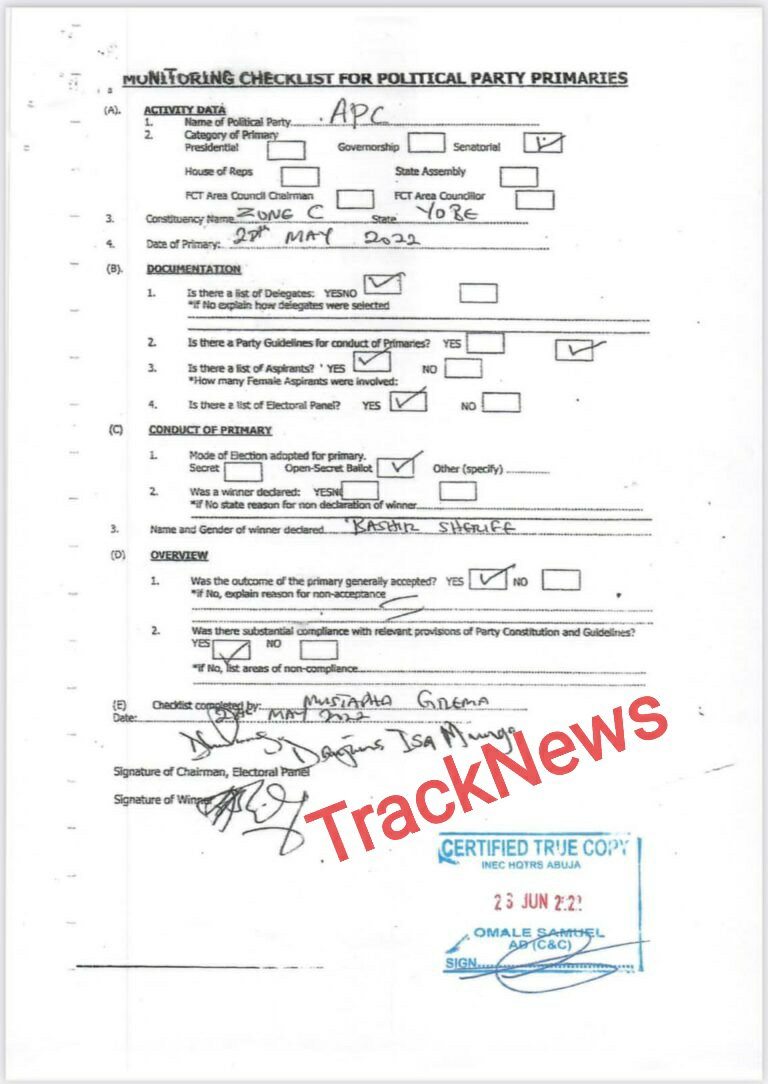 Mr Adamu had earlier hinted that the name of the Senate President was submitted to INEC as a candidate having taken part in a purported primary in Yobe North Senatorial District. He did not submit any evidence of when the secret primary held, where or who participated.

Mr Lawan himself has yet to publicly claim that he took part in any primary election, but only relying on the power of the ruling party to disregard the primary election outcome and arbitrarily nominate him as candidate.

Related Topics:2023: INEC Betrays Machina In CourtFavours Lawan as APC Candidate for Yobe North
Up Next