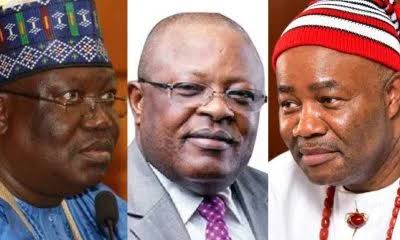 The Independent National Electoral Commission (INEC) has published the final list of candidates for the 2023 Senatorial and House of Representatives elections.

Conspicuously, the name of the President of the Senate, Ahmad Lawan, was missing as INEC failed to publish the name of any All Progressives Congress (APC) candidate in the section for Yobe North Senatorial aspirants.

INEC maintained its stance to not recognize any APC candidate for the election over the controversy that trailed the APC Yobe north senatorial ticket after the APC submitted Lawan’s name to INEC instead of Bashir Machina who won the primary election monitored by the commission.

The electoral umpire, however, indicated that it published Akpabio and Umahi’s names in compliance with the different court orders directing it to recognize them as the respective APC senatorial candidates for Akwa Ibom North West and Ebonyi South.

INEC, in a statement by its spokesperson, Festus Okoye, urged “all political parties to channel any observations on the list of candidates to the Commission and such must be signed by the National Chairman and Secretary of the political party and supported with an affidavit as provided in section 32(2) of the Electoral Act 2022.”

Related Topics:2023: Lawan Out…UmahiAkpabio In As INEC Publishes Final List Of Senatorial Candidates
Up Next

2023: Group Faults SDP Guber Candidate in Delta, Says He is a Serial Lier and Coward