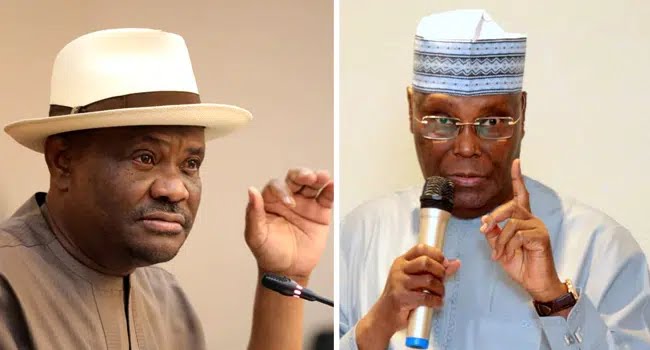 In the midst of the party’s crisis, governors chosen on the Peoples Democratic Party (PDP) platform are said to have split into four groups.
This comes after only four of the party’s thirteen governors—Aminu Tambuwal of Sokoto State, Douye Diri of Bayelsa, Darius Ishaku of Taraba, and Bala Mohammed of Bauchi State—attended the party’s National National Executive Committee (NEC) meeting.

According to a source who spoke with Tracknews about the party’s crisis, Atiku Abubakar, the party’s presidential candidate, has six governors on his side.

The source claims that Nyesom Wike, the governor of Rivers State, is supported by five other governors.

The source identified the governors of Edo State, Godwin Obaseki, and Akwa Ibom, Udom Emmanuel, as the party’s “tie breakers.”

The top official stated: “Wike’s camp has remained persistent on Ayu’s removal and the NEC meeting on Thursday precluded reconciliation despite the concessions made by Atiku’s party.

“There are now four camps among our governors. Some work for Ayu, some for Wike, some for the so-called neutral group, and some are spies.

According to the source, Walid Jibrin, the former chairman of the Board of Trustees, who had three months left in office, was compelled to step down in order to maintain party cohesion.

He claimed that because Iyorchia Ayu has the backing of the PDP founders, any attempt to have him ousted as national chairman of the party has become impossible.

“These leaders also do not joke with party discipline,” the top leader continued. The majority of them were upset with Wike for riding roughshod over the party.

Related Topics:2023: PDP Governors Split Into Four Due to Party Crisis
Up Next

Obi reveals that the APC and PDP refuse to disclose their sources of campaign funding.

According to a PDP Chieftain, “Wike Stance On Ayu’s Resignation Represent Hearts Of People Of South-East”