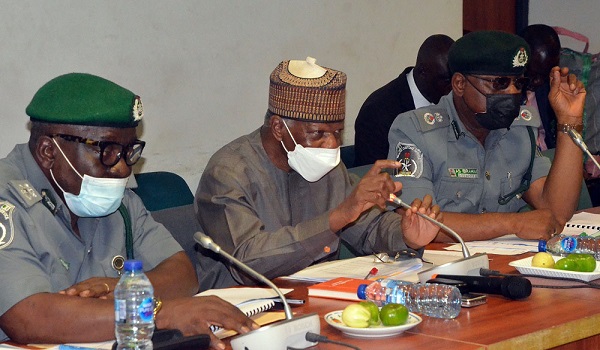 He stated this during his interactive session with the House of Representatives Committee on Finance on the 2023-2025 Medium Term Expenditure Frame and Fiscal Strategy Paper.

Explaining that the diversion of the excess 38 million litres“is not about smuggling,” he queried: “How many trucks will carry 38 million litres every day? Which road are they following and where are they carrying this thing to?”

In an apparent response to Ali’s poser, the Deputy Chairman of the committee, who presided over the session, Saidu Abdullahi, said that about 500 trucks(with 70,000 liter-capacity each) are needed to ferry the 38 million excess litres.

Abdullahi wondered “if the Nigerian Communications Satellite (NIGCOMSAT) had at any time captured images of trucks leaving our shores.”

Ali, who reacted to questions by the committee members on the proposed subsidy payment for 2022 and the over N11 trillion deficit expected, also spoke on NCS’ revenue targets and its non-remittance of operating surplus from its seven percent cost of collection to the Consolidated Revenue Fund (CRF).

He said: “I remember that last year, we spoke about this. Unfortunately, this year, we are talking about subsidy again. The over N11 trillion we are going to take as debt, more than half of it is going for subsidy.

“The issue is not about smuggling of petroleum products. I have always argued this with the NNPC.

“Scientifically, you cannot tell me that if I fill my tank today, tomorrow, I will fill the same tank with the same quantity of fuel.

“If I am operating a fuel station today and I go to Minna depot, lift petrol and take it to Kaduna, I may get to Kaduna in the evening and offload that fuel. There is no way I would have sold off that petrol immediately to warrant another load.

Ali explained that the Service was not remitting its operating surplus of seven percent because it is used for operations and payment of its staff members’ salaries.

“It is the only organisation that raises its own funds on a regularly basis.

“In 2017, from November to May 2018, it was this money that we used to pay our salaries. There is no law anywhere that says we can go to government if there is any short fall. If we didn’t have this money, there would have been riot in my house because these men will not work without pay.”

Ali also said the NCS was doing its best in tackling smuggling.

He said: “Our problem is in the marine area. We do not have adequate boats to patrol the waterways because that is what smugglers use in ferrying rice.

“We have been able to isolate some of the areas they are using. We are relating with the Navy to assist us in the high sea. We have also taken a diplomatic angle because some of these rice come through Benin Republic.”

Ali said the service was given a revenue target of N1.67 trillion for the 2021 financial year but was able to generate N1.715 trillion at the end of the year.

Deputy Chairman of the committee Abdullahi, who described subsidy payment as scam, said it constitutes a drain on the economy.

He said “If there is anything that has constituted a nuisance and has become a drain on the economy today, it is this issue of subsidy.

“As a government, we have not done well. We owe it to the people of this country to do what is right for this country. We are talking about over N6 trillion going for subsidy payment that almost doesn’t exist.

“I think it is very clear that what is required is the political will to put a halt to this.

“Considering the importance of the inter-dependence of these two arms of government, I think we should work together to put a halt to this. Posterity will be kind to us if we are able to proffer a lasting solution to this issue of subsidy because it is not sustainable.

“We talk about insecurity. This is the real course of it. The money that is supposed to go into the provision of social amenities is going into private pockets. I think there is a need to work together to put a halt to this.”

Advertisement
Related Topics:38m litres of petrol smuggled out dailysays Hameed Ali
Up Next