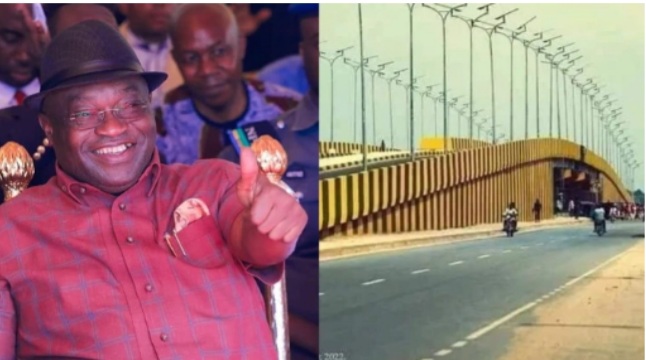 Not many people are impressed by what some consider a feat by the Governor Okezie Ikpeazu administration: the completion of the Osisioma flyover bridge which commenced seven years ago.

The bridge, now named ‘Okezuo Abia Flyover’, was commissioned by the Rivers State Governor, Nyesom Wike, on Monday. Governor Wike also commissioned the Aba-Owerri road during his visit. The Osisioma flyover is said to be the first-ever flyover to be built in Abia since the state was created 31 years ago.

Governor Ikpeazu described it as “a premier flyover” and that he feels “a personal sense of fulfillment” about delivering the bridge to citizens of the state.

I have a personal sense of fulfillment on the occasion of the official commissioning of our premier flyover because it has solved a major grid lock challenge on that axis of our commercial city. It also has capacity to further enable trade & commerce!

Wike, after the commissioning, said in a Facebook post: “I thank my brother and friend H.E Victor Okezie Ikpeazu for affording me the honour of commissioning the first Flyover ever built in Abia State. I also salute his commitment and courage to build solutions to the traffic problems of his state and embark on this project despite the limited resources available to his state.”

Kalu, who is the Chief Whip of Senate, said: “I congratulate Governor Okezie Ikpeazu on the commissioning of the Osisioma Flyover by Governor Nyesom Wike of Rivers State.

“The governor has done well on this and we must commend him. However, like Oliver Twist, we urge him to do more and also extend it to other senatorial districts,” he wrote in a Facebook post.

Ohuabunwa also remarked in a Facebook post: “May Good things happen to Abia. Congratulations Ndi Abia. Congratulations OVI.”
However, some Abia natives believe there’s nothing worthy of celebration about the flyover bridge, especially when compared to what other South Eastern states have achieved.

“What a shameful thing to celebrate. Disgusting. Even coming (from) an elder of the state like you,” one Akanu Ujah Agwu, a native of Abiriba in Abia, berated Ohuabunwa for commending Governor Ikpeazu over the flyover.

A Twitter user, Valiant Samson Idowu-Alaba (@ValiantNig), said “Ikpeazu completes Abia’s first ever flyover, popularly called ‘Center Table’ by Abians after seven years; meanwhile Umahi has 23 already within the same timeframe!”Below are some of the reactions on Twitter:

Chai! Ndi Abia, after almost 8years of building few meters flyover that did not concerned UmuAbia because the money that's used only belonged to Okezie Ikpeazu's family. Are we caused or we are the cause? Never again! Welcome Sir Alex Oti, please rescue us https://t.co/vJMxaVGPg7

Bobo na 7yrs it took you to deliver a painted flyover

One flyover in the entire state was constructed for 7 years and you're making all this noise. Abia state dey see nonsense for your hand. 🤦🏽‍♂️ https://t.co/1hPun1C1WB

This is the only project ikpeazu did in a bia state with tax payers money this is impunity https://t.co/AA1Ix1JQfw

You should be ashamed of yourself, nwoke "flyover ogbasara unu"

You sit on a debt profile of ~ $300m, $150m of which you borrowed yourself. Done practically nothing to improve IGR in Abia. But, at 57yrs of age you're deriving personal fulfilment over a flyover, in 2022.

That's what it took this man to construct this bridge. 7 fokin years.

The African elder is a disgusting piece of shit. https://t.co/4Wn7Y8ZW86

Only one flyover in 8 years, see as your shoulder pad high! 🤡

After seven years in office, you complete one project and still have the temerity to feel a sense of fulfillment??

Sir, do you close your eyes while and when you travel?

Mr. Governor our correspondent would like to have a brief interview with you or your CPS. Reach us on 07010000762.

Advertisement
Related Topics:Abia Citizens Blast Gov. Ikpeazu For Building One Flyover for 7 Years
Up Next

2023: CAN Finally Speaks On Collecting Money From Tinubu