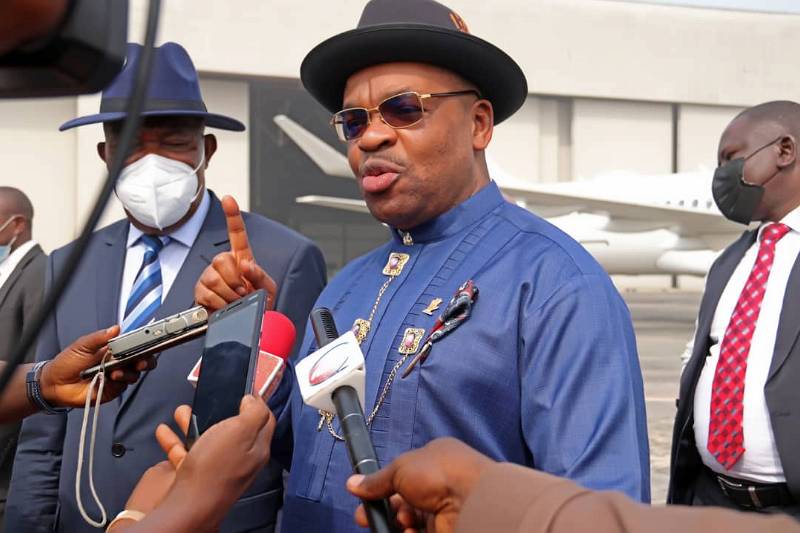 Governor Udom Emmanuel of Akwa Ibom State has thanked God for blessing the state with good leadership and for the increased development achieved since the state was created 35years ago.

The governor of Akwa Ibom appreciates the effort of a past leader since 35 years of creation direct all adoration to Almighty God. While addressing members of the Nigeria Union of Journalists, (NUJ) Akwa Ibom State Council, as part of activities marking the anniversary of the state’s creation, particularly thanked God for his administration’s achievement in the past seven years despite the challenges of recession.

His words: “God has been so good to Akwa Ibom State. Today at 35 we are waxing stronger, we are more United, we’re moving forward, and by the special grace of God, we will reach our destination, and our goals.

” As a State, we have been so blessed with good leadership from day one till today. And let me say here that in the past seven years I have been in the saddle of this state. Only God knows why Udom Emmanuel had to be a governor at a time like this.

” People sometimes forget that we passed through two major recessions, and a worldwide issue, COVID-19, that saw many counties economy crumbled, naira turning to what none of us here could have predicted some years back. But today in the face of the recession, COVID we are delivering dividends of democracy, we are delivering on our promises.

” I promised when I took the mantle of leadership in this state that I will do my possible best to take the State to the next level. Today whether you agree with me or not, anywhere on planet Earth you go and mention Akwa Ibom, you’ll be accorded the right respect.

“This is a State to be reckoned with in this State. Whether you believe it or not it is the flagship of development in this country. When we came into office, I said I was going to industrialize the State by looking at the three gateways- the Road, Air, and Water.

” Today we have conquered the Road. I stand to be challenged. I thank God by the grace of God today 1.15km Etebi-Enwang is 90percent completed. And I can assure you before December this year I’ll Commission Etebi-Enwang Road and the bridge so that there will be easy access into that area.

“And by the time I leave office, we would have linked the major areas of the state. I am not saying I am going to finish all the work. And today whether anybody believes it or not we have conquered the Air. I don’t want to overflow that. Everybody knows that we run the most efficient Airline business today in this country.

“Probably, what we don’t have enough is the Aircraft, and the problem is the Russia-Ukraine war. Today check the number of infrastructures we’ve put in Schools. As of the last count we have done close to 5000 projects in Schools across the state. I stand to be corrected.

” It may also interest you to know that some of the model Schools we equipped with computers, some of the communities have carted away all those computers. So as we criticize leadership let’s also talk about followership.

“By my records, I have done 113 internal roads despite the recessions, and Covid-19. In terms of major roads, you can compare what we’ve done as a subnational with what you have seen at the national. On the day I leave office we would have linked all areas by major, quality roads.

“I’m yet to find any subnational that has made the level of investment we’ve made in the healthcare delivery system today in this country. Whether you believe me or not in every subsector I think we have delivered on our promises; we have kept our social contract

The governor noted that the development projects being executed and commissioned by his administration were quality, and economically viable, and assured that the remaining major projects would be completed before the end of his tenure.

He stressed that his administration spends billions of Naira in training and preparing the best hands of our indigenes for the growing opportunities in the aviation sector and particularly Ibom Air.

“We have already sent the first batch of Engineers and Pilots to Airbus and we are preparing the second batch. I can conveniently say in every subsector we have delivered on our promises. I am not a governor that goes to Commission Transformer or Borehole I came to govern”, the governor asserted.

He stressed further the motives behind the success of the administration, “The only way to sustain the infrastructure and industries l have established in the State is Pastor Umo Eno. Hold me responsible if Umo Eno did not do better than myself”,

He, however, appealed for the support of the Akwa Ibom people to deliver the People’s Democratic Party (PDP) at the national levels in the 2023 general elections saying, “I want all of you to join hands with me to sell the PDP at the national”

Related Topics:Account me for Umo Eno defect – Emmanuel Udom
Up Next

Tinubu and Shetima’s presidential ticket in 2023 is gaining momentum.

PDP CRISIS: Udom Urges PDP leaders to embrace unity and fulfill promises ahead of the 2023 election.