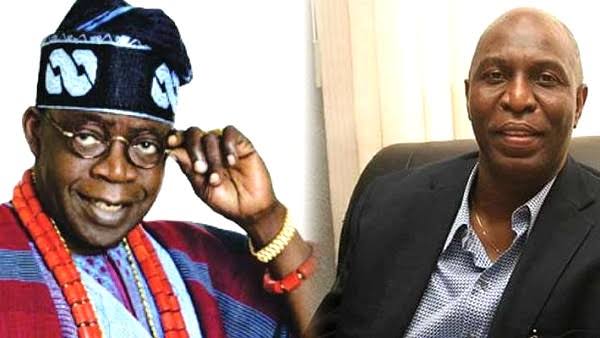 A lingering dispute between former Managing Director of Alpha Beta, Oladapo Apara and Bola Tinubu has been settled
The dispute, in which Apara claimed he was denied his benefits lasted for over two years, was settled amicably.

A dispute spanning four years between APC presidential candidate Bola Tinubu and Oladapo Apara, erstwhile Managing Director of Alpha Beta, a Lagos-based tax consultancy firm, concerning N18 billion benefits and an allegation of fraud to the tune of N20 billion has been settled.

According to TrackNews Nigeria Alpha Beta has been a subject of controversy for over 10 years, with Tinubu’s rivals claiming that he has owned the company by proxy since 2002 while he was still governor of Lagos State.

The ex-MD claimed the firm made over N1.5 trillion for the Lagos State government from 2002 to 2018 and got an average of about 10 per cent commission.

Four years ago, Apara petitioned the Economic and Financial Commission (EFCC), alleging that the company belonged to Tinubu by proxy. Although he also accused the company of tax evasion amounting to N100 billion, the company denied the allegation, saying Apara was removed due to fraud allegations.

In a statement, Alpha Beta stated that while he was the MD, Apara had used his position to move vast amounts of money from the company fraudulently converting $5 million used to pay for cloud-based services, which were discovered to be worth less than $300,000.

In 2020 the former MD sued Tinubu, Alpha Beta and the new MD, Akin Doherty, to a Lagos High Court.

Apara alleged that, as head of the company, he began to look into its finances and discovered mysterious transfers of over N20 billion in varying currencies to several firms, including firms with links to The Nation newspaper, allegedly owned by Tinubu.

The former tax firm’s boss said he learned that all the payments were approved by the partners who were proxies of the former Lagos State governor and noted that Tinubu was aware of the transactions.

Africa Report stated that the frontline presidential candidate was angry that he was investigating the company’s finances and ordered his demotion to deputy managing partner, leading to his removal.

Reports said that Apara said his removal was illegal and that he was denied his benefits as a founding partner of the firm and prayed the court to order the full payment of his entitlements, amounting to N18 billion.

After almost two years of legal tussle, the parties informed Justice O.F Aigbokhaevbo that they wanted to settle out of court. According to Africa Report, citing court documents, a final agreement was reached and approved by the judge in August 2022.

Apara said he had forfeited his six million shares in the company as part of the settlement and would abide by the terms as long as Tinubu kept to the agreement’s terms.

2023: I will Scrap Tinubu’s Alpha Beta if elected, says leader of Lagos APC group
Legit.ng reported that the chairman of the Ambode Campaign Organisation (AMCO), Olawale Oluwo has vowed that the group will facilitate the moves to scrap tax consultancy firm, Alpha Beta.

Oluwa made this known in an interview with ThisDay newspaper published on Tuesday, May 3.

It will be recalled that in December 2018 under the administration of the then Lagos state governor, Akinwunmi Ambode, Oluwo resigned his position as the commissioner for energy and mineral resources in Lagos state.

CUPP, CSOs Call On NGF To Honour Agreement With Nwoko