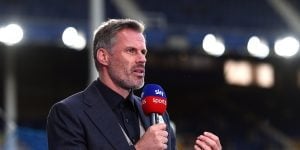 Jamie Carragher, a former defender for Liverpool, has intimated that he believes Erling Haaland of Manchester City may surpass Thierry Henry of Arsenal as one of the greatest players in Premier League history.

Since his transfer from Borussia Dortmund, Haaland has had an incredible start to life in the top division of English football.

In his first five Premier League games, the Norwegian striker has netted nine goals, including back-to-back hat-tricks against Crystal Palace and Nottingham Forest.

“I’ll be covering the Aston Villa vs. Man City game on Saturday at Villa Park. I’m delighted to see any game, but I’m especially looking forward to seeing Haaland live, hearing someone commentate on him for the first time, and getting a good look at him away from the ball. I can hardly wait to see him.

We are aware of the fantastic player we have in the league, but I believe we have something truly exceptional.

We will position him next to Thierry Henry once his tenure at Manchester City or in the Premier League is complete, according to Carragher.

Related Topics:EPL: Carragher identifies a striker who may surpass Thierry Henry at the moment.
Up Next

Five important players for Klopp will miss the Everton vs. Liverpool encounter.