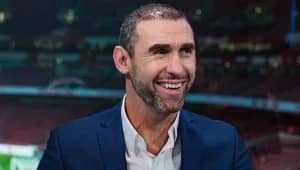 Martin Keown, a former Arsenal player, praised his former team’s 2-1 victory over Aston Villa on Wednesday but called it “ridiculous” to call them “title contenders” after only five games.

With the win, Mikel Arteta’s team continued their unblemished start to the campaign and held onto first place in the Premier League.

The Gunners’ first goal came from Gabriel Jesus before a corner kick from Douglas Luiz beat Aaron Ramsdale. However, Gabriel Martinelli made sure Villa’s comeback was in vain by scoring the game-winning goal in the second half.

Keown said he “hopes this is the start of something spectacular,” but it is too soon to think of Arsenal as a serious challenge to Manchester City, the current champions.

“With this Arsenal team, it’s step by step. It’s absurd to refer to them as title contenders at this point in the season.

Keown remarked, “It’s a new team, but maybe it’s the beginning of something spectacular.”

Related Topics:EPL: It's absurd to refer to them as title contenders - Keown responds to Arsenal defeating Villa.
Up Next

Boehly told to terminate the contract of another Chelsea midfielder.