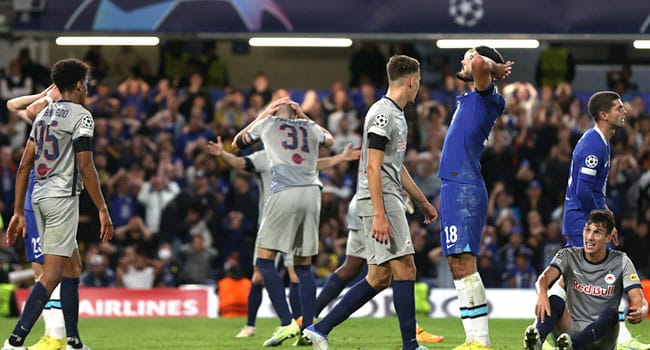 Graham Potter admitted Chelsea have to “improve the little details” after Red Bull Salzburg spoiled his first match in charge with a late equaliser in Wednesday’s 1-1 draw in the Champions League.

Potter was on course for a winning debut when Raheem Sterling put Chelsea ahead early in the second half at Stamford Bridge.

But the former Brighton boss, who replaced Thomas Tuchel last week, had to settle for a point as Noah Okafor punished sloppy defending to equalise in the closing stages.

It was a largely underwhelming performance from Chelsea, underlining the work Potter must do to repair the flaws in the expensively assembled squad left behind by Tuchel.

“It’s always irritating when you concede a goal. Overall the defensive performance was quite good, it’s just the little details we will have to improve,” Potter said.

“We’re disappointed with the result. We scored a good goal, but lost a bit in the second half.”

Tuchel was dismissed last Wednesday in the aftermath of Chelsea’s embarrassing 1-0 loss at Dinamo Zagreb in their Champions League opener.

Having taken just one point from their first two Group E matches, Chelsea now face a fight to qualify for the knockout stages with two matches against AC Milan looming.

“It is what it is, we have to dust ourselves down. Personality and application was good, we will get better,” Potter said.

“It has not been easy for the boys. They have responded to us really well over the last few days. The attitude has been fantastic. No complaints apart from the fact we have not taken three points.”

With Sunday’s Premier League game against Liverpool postponed due to the forthcoming funeral of Queen Elizabeth II, Potter will have to wait until October 1 for his second game when Chelsea travel to Crystal Palace after the international break.

At least that will give Potter time to find his feet after he was appointed just 24 hours after Tuchel’s shock exit — sparking what the 47-year-old described as a “whirlwind” week as he starts the biggest challenge of his career.

Potter earned widespread admiration for his impressive work with Brighton, who enjoyed their highest Premier League finish last season when the Englishman led them to ninth place.

But thriving on a limited budget at Brighton provides only scant preparation for the unique demands of handling a club of Chelsea’s ambition.

Potter had never even been to a Champions League game before walking into Stamford Bridge on Wednesday.

Related Topics:Graham Potter Frustrated As Salzburg Hold Chelsea
Up Next