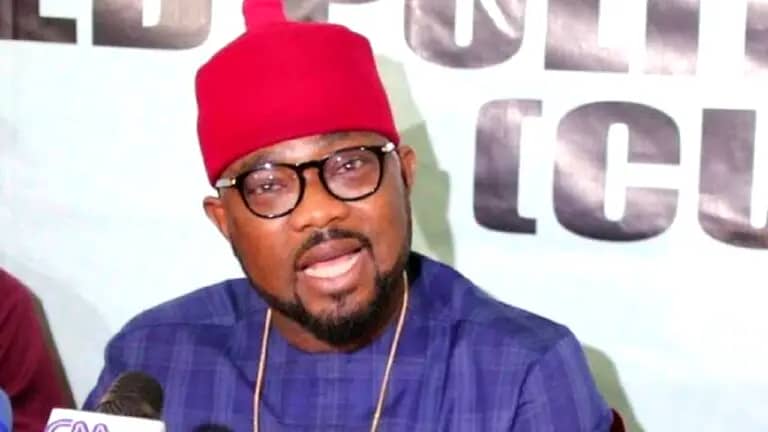 Ikenga Ugochinyere has been detained and is being questioned by the Imo State Government after he claimed that voter registration in Omuma, the ward where Governor Hope Uzodimma of Imo State lives, was inflated with false names.

Declan Emelumba, the Imo State Commissioner for Information and Strategy, issued the call on Friday, September 16, 2022, telling a press conference that “tolerance of illegality will equal to disregarding the specious and seditious outburst of Ugochinyere.”

As a result, he urged the appropriate security organizations to “immediately arrest the said Ugochinyere to find out from him how he obtained the voters register he has been displaying before the public even while the Independent National Electoral Commission INEC is still at the stage of Automated Aiometric Verification of Systems, which must be completed before an official voters register can be released to the public.”

“INEC has released a formal declaration on the subject and has gone further to disclose the names of the States that entered fraudulent registration of voters and Imo State is not on that list,” the Commissioner claimed.

So, Ugochinyere “must have either hacked INEC Saver and doctored documents there-from or fabricated the document he was displaying,” according to Emelumba, who added that “this is criminal and it is vital that he should be immediately arrested for interrogation.”

Emelumba also refuted Ugochinyere’s assertion that Omuma had engaged in fraudulent registration, emphasizing that “the security agencies have an urgent task to find out how Ugochinyere, a PDP candidate in the 2023 elections for Ideato North and South Federal Constituency, came about the documents that are intended to heat up the polity, create tension, and incite the public.”

In addition, he questioned Ugochinyere on what he called “the ridiculous claim that the so-called Conference of United Political Parties (CUPPsupposed )’s probe into the 22 states held by the APC in Nigeria only ended up focusing on the home Ward of Governor Uzodimma.”

“From his reasoning, it is evident that there was no initial inquiry but rather a circus act intended to discredit the acting governor of Imo State.”

In the words of Emelumba, “By all appearances, the spectacle by Ugochinyere was concocted by PDP in Imo State to humiliate the Government in a fruitless attempt to lessen the shine from the enormously successful Presidential visit to Imo State on Tuesday, September 13, 2022.

“This is because it’s hard to understand why Ugochinyere revealed his tissue of lies just a day after Mr. President’s fruitful official visit to Imo State,” the statement continued.

“It is only normal for PDP to voice their dismay and devastation on the successful launching of the flagship projects of the Governor by Mr. President and its inherent gains,” the commissioner stated.

The PDP candidate for the upcoming elections in the Ideato Federal Constituency of Imo State, Ugochinyere, was urged by Emelumba to “stop hiding under CUPP and using the body as a front and come out publicly as PDP candidate to campaign for himself and his master” during the briefing.

Denying the assertion made by the same Ikenga Ugochinyere that there were fewer than 6000 registered voters in Omuma Ward in 2014, Emelumba stated that “it is on good authority and from verifiable data from INEC that Omuma Ward had close to 10,000 registered voters under that period and for 2019 elections when their son contested as a Governor, they registered over 23,000 because many indigenes from the Ward came home to register to support their son who was contesting the

The State Polytechnic at Omuma’s students and employees, who come from all across Nigeria and live in Omuma, may have registered more than 20,000 additional voters for the 2023 elections, the speaker said.

Emelumba said that “the porous allegations against the Governor was to insinuate that the’secret court action’ was filed by an agent of Government,” pointing out what he called “the tepid reference by Ugochinyere to a pending’seccret court action” in a Federal High Court Owerri against the use of BVAS.”

“Unfortunately, an examination into the suit-claim found that the NBA stamp used in bringing the action belonged to a lawyer who is a very close colleague of former Governor Emeka Ihedioha, the boss of Ugochinyere,” continued Emelumba. Therefore, the origin and purpose of the entire concoction are clear.

“In the same vein, Ugochinyere’s claim that residents have fled Omuma’s community due to insecurity and that the INEC office there has been set on fire clearly supports the government’s claim that the PDP was responsible for the unrest in Imo State, specifically in Orlu and Omuma, in order to advance its political goals. If the allegation were accurate, neither the Catholic Bishops’ Conference nor the President’s trip to Orlu to commission projects would have taken place there. This is a blatant indication that Imo has moved past this and Imo State’s state of instability is over.

It is obvious that Ugochinyere and his antics are a diversion intended to enhance the PDP’s fraudulent actions and draw attention away from their nefarious intentions to rig the 2023 elections.

Related Topics:Ikenga Ugochinyere is wanted by the Imo government.
Up Next

Because of the threat of bandits, students in Kaduna are reluctant to return to class.