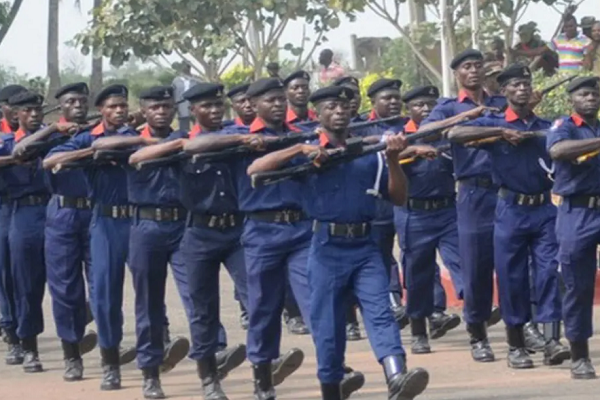 Centre Against Injustice and Domestic Violence (CAIDOV) has kicked against a merger of police and Nigeria Security and Civil Defence Corps (NSCDC).

Executive Director Gbenga Soloki told a news conference that insecurity in the country was pathetic.

He said the security challenges called for a collaboration of all agencies, and not a scrapping or merger of any.

‘This is why the Orosanye report, which suggests the NSCDC be either scrapped or merged with police should not be implemented’, Soloki said.

Soloki added: “This is not the time for merging or attempting to scrap NSCDC, now that we daily face security challenges … NSCDC has evolved into an indispensable force, garnering acclaim for its exploits. With billions of naira lost annually to oil vandals, the role played by NSCDC in curbing crime is being appreciated.

“…. we call on the Federal Government not to merge NSCDC with the police…”

“Many countries have civil defence organisations to protect civilians from military attack and provide rescue services after disasters…civil defence is a government-managed organisation. The move to repeal its enactment bill is detrimental to the wellbeing of Nigerians … Rather, the Federal Government should increase the manpower and funding for the corps …’’

Chief Whip of the Senate Rowland Owie has appealed to President Muhammadu Buhari not to be stampeded into merging the NSCDC with the police as being canvassed.

“Recall that the Federal Road Safety Corps (FRSC) finished in effectiveness when it was merged with the police, and we fear a similar fate may befall the Corps. NSCDC has come to stay, the laws are very clear, there is no overlapping, the police should face its job and NSCDC its job. We also call on the National Assembly not to pander to the dictate of selfish characters.”