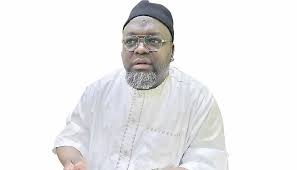 The Department of State Services (DSS) has arrested Tukur Mamu, the man who negotiated the release of some of the hostages in the March 2022 train abduction in Kaduna.

Mamu who also doubles as the spokesperson for the Kaduna-based cleric, Ahmad Gumi, was arrested on Wednesday afternoon at the Aminu Kano International Airport in North-west Nigeria upon his arrival from Egypt

Mamu told newsmen he was arrested and detained by official of the DSS.

He was accompanied by his two wives and one other person.

Mamu had been arrested by the Interpol in Egypt on his way to Lesser Hajj in Saudi Arabia and made to return home.

Mamu, who is the Publisher of Desert Herald Newspaper in Kaduna, had announced his withdrawal as the lead negotiator in securing the release of the hostages of the Abuja-Kaduna train attack after he alleged a threat to his life by the Nigerian government.

The terrorists are still holding several of the victims captive.

Related Topics:JUST-IN: Deported Tukur Mamu held by DSS on arrival from Egypt
Up Next