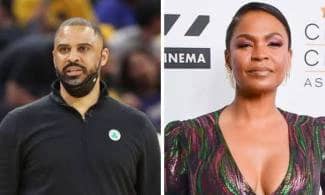 The suspension came Thursday night and is effective immediately.

Nigerian Boston Celtics Coach Ime Udoka has been suspended for the 2022-23 season.

According to ESPN, the suspension came Thursday night and is effective immediately.

A decision about Udoka’s future with the organisation will be made later, the team said.

The team also cited violations of team policies in its announcement.

TrackNews Nigeria earlier reported that 44-year-old Udoka had an intimate relationship with a female member of the franchise’s staff.

Udoka has also apologised to fans, family and the Celtics organisation for letting them down.

“I want to apologise to our players, fans, the entire Celtics organisation, and my family for letting them down,” Udoka said in a statement to ESPN’s Malika Andrews.

“I am sorry for putting the team in this difficult situation, and I accept the team’s decision. Out of respect for everyone involved, I will have no further comment.”

The season-long suspension is largely unprecedented for a sitting head coach in the NBA.

Related Topics:Nia LongNigerian NBA Coach Suspended For Cheating On His WifeWith Staff Member
Up Next