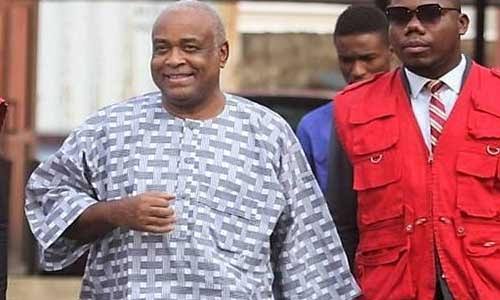 The Economic and Finan­cial Crimes Commission (EFCC) has arraigned John Abebe, a younger brother of the late former First Lady, Stella Obasanjo before the Lagos State Spe­cial Offences Court in Ikeja over allegations of fraud.

Some of the counts against the defendants read: ” That you Dr. John Abebe and Ka­moru Alade Oladimeji, on or about the 4th day of June 2013 in Lagos within the jurisdic­tion of this Honourable Court conspired amongst your­selves to commit felony to wit; stealing the sum of N120 million property of Arsenal Technologies Limited.”

“That you Dr. John Abebe and Kamoru Alade Oladime­ji, on or about the 4th day of June 2013, in Lagos within the jurisdiction of this Hon­ourable Court conspired amongst yourselves to com­mit felony to wit; obtaining by false pretence the sum of N120 million property of Ar­senal Technologies Limited under the pretence that your property lying being and situate at 9, Magbon Close, Ikoyi-Lagos State, which you pledged as the security to the Arsenal Technologies Limited was unencumbered, which representation you knew to be false.”

“That you Dr. John Abe­be and Inducon Nigeria Limited, on or about the 4th day of June 2013, in Lagos, with intent to defraud and to gain for yourself the sum of $1,000,000.00 or its Naira equivalent from Arsenal Technologies Limited by false pretence to procured the exe­cution of valuable security to wit: a deed of assignment be­tween Inducon Nigeria Limit­ed and Arsenal Technologies Limited, wherein you falsely claimed that the property ly­ing being and situate at No. 9, Magbon Close, Ikoyi-Lagos was unencumbered and that you have full powers to assign and transfer the said property to the assignor; Arsenal Tech­nologies Limited.

IPDI requests that the soldiers leave the Rivers communities