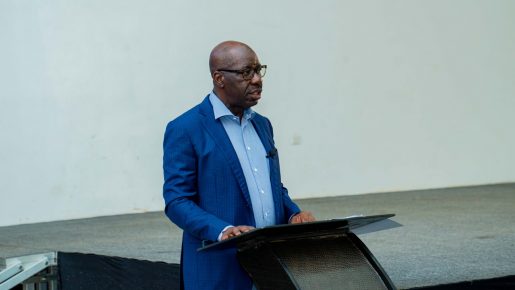 169 homes will get Edo-Cares Grants
The commissioning and handover of Uhiele Community’s multi-million dollar, ultra-modern community and development center have been completed in Esan West Council, Ekpoma, Edo State.

A multipurpose hall, offices for two community-based non-governmental organizations, the Uhiele Development Forum (UDF) and the Ukpoke Area Development Foundation (UADF), a boardroom, and an office complex for the neighborhood watch group are all included in the center.

The center was supported by Lady Gloria and Chevalier Charles Osezua, an engineer.

Godwin Obaseki, the governor of Edo State, is scheduled to attend the ceremony on October 6 as the special guest of honor, along with other dignitaries, including Marcus Onobun, speaker of the state House of Assembly, notable sons and daughters of Uhiele, government officials, friends, and well-wishers. The event will take place at Ukpoke, the traditional headquarters of Uhiele.

The event will be presided over by Chief Francis Ehiamen Ulinfun, a politician, academic, philanthropist, and community leader. Andrew Osewele Ekpenwele, the chief host from Uhiele, Pennsylvania, will be assisted by seven other odionweles.

The commissioning will take place on Wednesday, October 5, and will be followed by a Thanksgiving Mass at the Catholic Church of the Nativity of Mary and a blessing of the facility by Most Rev. Donatus Ogun, the Bishop of the Uromi Diocese.

The initiative would give the populace a stage on which to celebrate their history and traditions and collect money for the improvement of infrastructure.

Sir Osezua recounts that the Uhiele Town Hall’s pitiful condition and the sons and daughters’ subsequent pleas for help led to the building of the current community center.

In order to discuss the idea of not only reconstructing the hall but also raising it into a modern center with a multipurpose hall, offices, and boardroom, the sponsor accordingly met with the Odionwele of Ukpoke, who also doubles as the Odionwele of Uhiele, in January 2022.

In approving our request, the Odionwele prayedly said, “My son, if you can do this, it will be to my honor, you would have eliminated dishonor from us all,” according to the sponsor. The headquarters of Uhiele, Ukpoke, is where the elders and people gather on significant occasions; its reconstruction will undoubtedly restore our legacy.

Meanwhile, yesterday in Benin City, no less than 169 people from disadvantaged families received training in order to be eligible for the Nigeria CARES (COVID-19 Action Recovery and Economic Stimulus (N-CARES), also known as EDO-CARES) Grants in Edo.

During a one-day livelihood support training and orientation hosted by the State Cash Transfer Unit (SCTU), Mrs. Ifueko Alufohai, the Permanent Secretary of the Ministry of Youth and Humanitarian Affairs, announced this and added that the recipients would receive grants ranging from N20,000 to N200,000.

According to Alufohai, the N-CARES emergency relief program, supported by the World Bank, was established to lessen the negative impact of the COVID-19 pandemic on livelihoods, particularly for those who own companies in the unorganized sector.

In her welcome speech, Flora Bossey, the head of the State Cash Transfer Unit, stated that the program was created for young people and women who are involved in the economy.

Speaking on behalf of the recipients, Mrs. Precious Osunde thanked the state government for the thoughtful gesture and pledged to use the award to grow her company.

Delta: Death of four in an auto accidents being protested by youth.