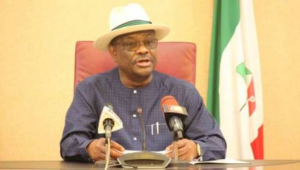 Governor Nyesom Wike of Rivers State has accused Iyorchia Ayu, the national chairman of the Peoples Democratic Party, of being extremely corrupt.

Wike, who was an aspirant in the PDP presidential primary held months ago, made the allegation on Friday at a live media chat in Port Harcourt, Rivers State.

The governor claimed that Ayu collected N1billion from an aspirant in Lagos and that the money never made it to the PDP’s account, challenging Ayu to deny the accusation.

The Rivers governor, who has been at the centre of the crisis in PDP, also revealed how the Presidential Candidate of the party, Atiku Abubakar, told him, a few other governors and party leaders that he had confronted Ayu on the need to resign.

“He agreed with us that Ayu had to go. He said we should give him one week, that we should go and work out the modalities.

Related Topics:Never Remitted It – WikePDP Crisis: Ayu Collected N1billion In Lagos Before Primaries
Up Next

WAHALA: I remain chairman of PDP Board of Trustees for life – Senator Walid Jibrin

BREAKING: What Tinubu offered me to dump PDP – Wike opens up