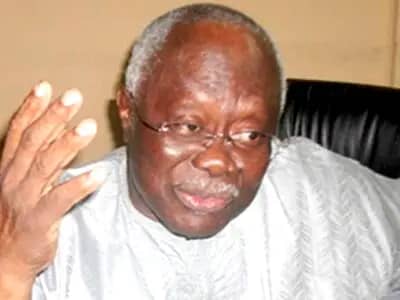 According to Chief Bode George, a member of the Peoples Democratic Party’s Board of Trustees, the call for Sen. Iyorchia Ayu, the party’s national chairman, to resign was made only on moral grounds and was motivated by the desire for equality, fairness, and inclusivity

This was stated by George, a former Deputy National Chairman (South) for the party, in an interview on Friday’s Morning Show of Arise Television, which was watched in Abuja.

He observed that given the current situation, it would be challenging for him and other party officials in the South West to persuade residents of the region to support the party because two of the party’s six major posts are in the north.

George claimed that the job facing South Westerners in the PDP was made herculean by the fact that, despite having no party positions to show for it, they would be competing with the All Progressives Congress, which is running a son of the soil, Asiwaju Ahmed Tinubu, for president.

He claimed that the PDP’s founding fathers chose to divide the country into six geopolitical zones in order to encourage inclusivity.

There are six top positions in our nation, he said. The offices up for grabs are the Presidency, the Vice Presidency, the Senate Presidency, the Speakership, the Secretary to the Government of the Federation, and the National Chairman of the party, ensuring that each zone takes one of these high-ranking positions home with them. In other words, you have eliminated conflict and the resentment of those who are merely observers of how our nation is run?

Additionally, all of these positions in the north will go to the south after eight years, and vice versa.

“If you look at it, the president is at number one, and the party chairman is at number six. In order to achieve balance, numbers one and six cannot originate from the same zone.

He continued, “We are not requesting that Ayu be forced to resign or be put to sleep. He ought to give up in the interest of inclusion and unity and allow us to evenly distribute the top positions. Because we are going to campaign in my zone and we want our party to win.

“If it didn’t matter to the party, I wouldn’t worry about it, but how can I get on the podium in the South West and convince the populace that we are prepared and that they must support our own candidate?

We need to understand that the main opposition party, the APC, has a candidate from the South West. How should I respond to them? What do we have when they have the presidential ticket?

The former military governor of Ondo State questioned how Northern PDP supporters would react if the party’s National Chairman Presidential candidates were from the South.

He recalled that Ayu himself had promised to step aside to allow for balance if another northerner won the party’s presidential ticket.

Atiku Abubakar, the PDP presidential candidate, claimed that asking Ayu to leave at this time would violate the party’s constitution. George dismissed this claim as having a double standard.

He stated, “We must adhere to zoning and rotation of elective offices and party offices,” which is stated in Section 7(3) of our party’s Constitution. If we had maintained that rigidity, Atiku would not have been able to run for president when a northerner won the chairmanship.

Therefore, you refer to the constitution when it’s convenient, and you ignore it when it’s not convenient.

The PDP chieftain outlined how the contest for the presidential ticket was opened as a result of appeals from the majority of party members who argued that contestants had spent more than six months traveling and spending money to sell themselves to party members because the party did not zone the ticket as was the case in the past.

George observed that, aside from the members who were co-opted into the council, the NWC was essentially falling into hibernation as a result of the announcement of the membership of the presidential campaign council.

What should I tell the people, he added? Will I advise you to hold off until after the election? No! Our National Chairman is tasked with introducing our Presidential candidate during each campaign. What will the North do when they arrive in the South and introduce themselves to the North?

The senior politician referred to claims that he was speaking in this manner out of sympathy for Rivers State Governor Nyesom Wike as being ludicrous.

When he stood up at our meeting to discuss the zoning report that permitted candidates from every zone to run for president, he claimed that Wike wasn’t around.

George asserted that he had been a member of the party long enough to understand the goals of its founders.

Related Topics:Atiku would not have become a viable contender for president — Bode GeorgePDP CRISIS: If the party had adhered to the constitution
Up Next

The Labour Party boasts that we are prepared to take power in 2023.

The Buhari Administration, the 2022 headies, and the diaspora phenomenon