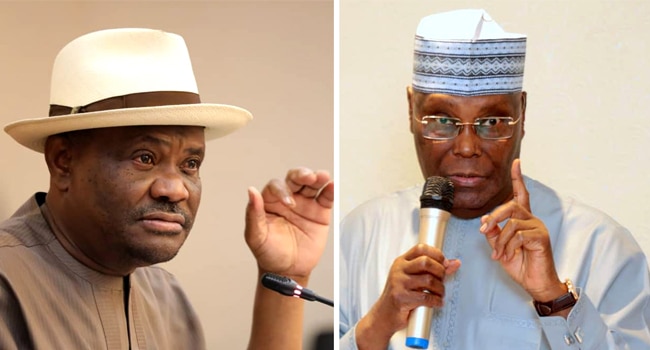 The leadership of the Peoples Democratic Party (PDP) is yet undecided on who would lead the Atiku Abubakar presidential election campaign.

This is because Atiku has shunned his campaigns from funding from abroad which was apparently to eschew the controversial reactions trailing diaspora funding and crowdfunding of elections in Nigeria recently.

In a related development, Mr. Nyesom Wike, Governor of Rivers State, announced that one of the reasons he was still angry with the leadership of the PDP after the party’s presidential primary, was because the PDP has not rewarded the state’s benevolence since 1999.

Then, the Rivers governor has at yesterday, also met with 17 gubernatorial candidates of the party all over the states, as an effort towards lasting reconciliation in the party.

BUT, the party is yet to settle for both the chairman and director general of the presidential campaign, even though all PDP governors were automatic members of the campaign council.

The names of former Senate President, Dr. Bukola Saraki and the chairman of the PDP Governors’ Forum, Governor Aminu Tambuwal of Sokoto State were earlier touted to lead the campaigns, but they are both from the North.

Meanwhile, as part of steps to appease the Rivers State Governor, Nyesom Wike, the party was already considering someone from South-west to lead the presidential campaigns.

Curiously, the Oyo State Governor, Seyi Makinde, was not disposed to leading the campaigns, because he is seeking reelection.

Track News Nigeria learnt that the Southwest might present a former national secretary of the PDP and former Osun State Governor, Ologunsoye Oyinlola.

Recall that Oyinlola and Makinde are seen as political associates, and by extension, Wike’s allies.

Also, the Governor of Enugu State, Ifeanyi Ugwuanyi, was on the card, if the choice of Oyinlola did not fly with members of NEC.

It was in view of this that Atiku stated that his campaign organisation, the Atiku Abubakar Campaign Organisation (AACO), has been drawn to an undated letter issued under the authority of a “Campaign Coordinator/ President” of a group calling itself the Atiku Abubakar Business Supporters in Diaspora (AABSID).

“This letter is titled: ‘Fundraising Dinner Event for Alhaji Atiku Abubakar Presidential Election Campaign 2023’ and, apparently, is being sent to potential donors and members of the general public inviting donations to the presidential campaign of our candidate, Atiku Abubakar, in exchange for unfettered access to Atiku Abubakar, among other promises.

“The general public is hereby notified that the aforementioned Atiku Abubakar Business Supporters in Diaspora (AABSID) is not in any way affiliated or related to Atiku Abubakar and the Atiku Abubakar Campaign Organisation, and has not been mandated or authorised in any way whatsoever to represent the candidate or his campaign in any matter whatsoever.

“In line with the foregoing, any person or organisation dealing with the aforementioned Atiku Abubakar Business Supporters in Diaspora (AABSID) and/or its Campaign Coordinator/President or indeed with any other organisation for the purposes of raising funds for our presidential candidate does so at their own risk and responsibility,” the statement stated.

So, Atiku has continued with strategies on how to actualise his presidential dream, when he met with former presiding officers in the House of Representatives.

As seen on his verified Twitter handle, Atiku noted: “I just rounded off a meeting with former presiding officers and leaders of the House of Representatives at the Yar’Adua Centre in Abuja.

“The meeting afforded a double advantage of seeking their support in building a grassroots network for our upcoming campaign. The second benefit is that it provides a legislative insight into some of the reforms we shall work through. Altogether, it was a well-spent afternoon, and I thank them all for honouring my invitation,” Atiku stated.

Meanwhile, Atiku has appointed the Commissioner for Information in Delta State, Mr. Charles Aniagwu, as one of his spokesmen for the 2023 presidential campaign

A press statement issued by Atiku’s Media Adviser, Paul Ibe, added that Aniagwu’s appointment took immediate effect, with the responsibility, among others, to keep the electorate up to speed with happenings in the presidential campaign.

But Wike, who has increased the grounds of his anger, said since 1999, no State had given votes to PDP more than Rivers State, but such support has never been rewarded, because there was no visible benefits in terms of federal government projects.

He said in the 2023 general election, votes from the state will be put where a concrete reward is guaranteed for such electoral support.

Speaking at the formal inauguration of the Etche Campus of the Rivers State University in Abara community of Etche Local Government Area, the governor, who also flaged off the construction of Ultra-modern 2 storey building of 2 and 3 bedrooms staff quarters within the campus premises, declared that the State could no longer settle for the crumbs, adding that they would courageously negotiate what was befitting to its status.

“At the appropriate time, we will take decision on what to do. This is because since 1999, I want Rivers people to reflect on this, ponder over it, we brought the highest votes to the Peoples Democratic Party (PDP).

“I challenge any State to say they brought more votes for the PDP. I challenge any state to say, in terms of support, for the PDP. Which State has given more support than Rivers State? Is there anyone? Since 1999, show me one federal project in Rivers State. Is there anyone? So, if you want our votes, then tell me what you will give Rivers people. Our votes are not for dash anymore.”

He recalled that while some of his colleagues during the 2019 general election negotiated and gave their votes to President Muhammadu Buhari, Rivers State alone resisted by giving all its votes to PDP. But such persons, Wike noted, were now talking as if they loved the PDP more.

“This (federal) government fought us, but we survived it. Most of them who are talking now, if this federal government had descended on them, most of them would have crumbled. They were going to negotiate with Buhari in 2019, that was how Buhari won election. They came to me, I said no negotiation, PDP must win,” he said.

The Rivers state governor revealed that some of his close associate have expressed concerned about his safety, but he has told them not to be bothered, because God was on his side.

“Some people tell me be careful, they will kill you. Kill who? who told you, you will not die first before you reach me? So those of you who are panicking, you don’t need to panic. If you have God, what are you afraid of? They’ve chased us, they’ve fought us but today, we are standing strong,” he said.

Clarifying his comments on why he said he was willing to deal with those who wanted to challenge his electoral capacity, he said God has given him power, and resources as a governor to do what was appropriate and good for Rivers people and would not leave what he would do for God to do.

The 17 governorship candidates, who came from Sokoto, Jigawa, Kaduna, Katsina, and 13 other states were said to have met Wike behind closed doors, at his country home in Rumueprikon, Obio-Akpor Local Government Area.

According to sources, the meeting which held around 8 pm yesterday, was designed to beg Wike to forgive Atiku and Ayu, as well as other PDP leaders, who had offended him.

In similar breath, a former National Vice Chairman PDP in the South-south, Emmanuel Ogidi, yesterday, blamed the crisis in the PDP on the disappointment suffered by Wike from losing the presidential primaries.

He, however, added that Atiku has the experience to manage the Rivers governor.

Speaking with the Arise News Television, Ogidi said Wike never believed that he would lose the presidential primary and described his utterances as part of the efforts of letting off his frustration.

Ogidi argued that Atiku was a unifier that would settle the scuffle and continue to emerge as the winner in the 2023 general election.

Related Topics:PDP In Dilemma Over Who Leads Presidential Campaign For 2023
Up Next

2023: What We Told Britain, Others On Northern Presidency – PANDEF