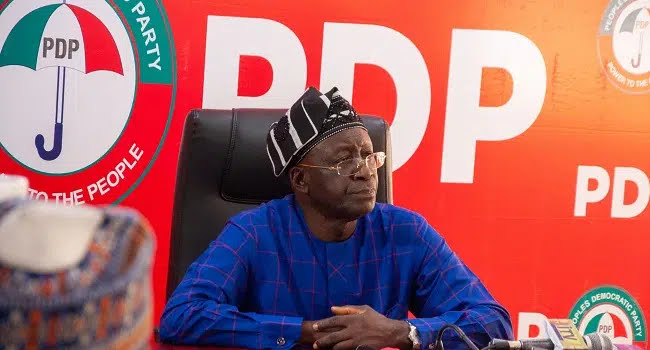 On Thursday, the Peoples Democratic Party (PDP) will decide Iyorchia Ayu’s future as its national leader.
As the party’s northern candidate for president, Atiku Abubakar, emerged, there have been calls for Ayu to step down from his position.

As part of its demands to endorse Atiku in 2023, Nyesom Wike, the governor of Rivers State, has demanded Ayu’s resignation.

The fate of Ayu will likely be decided by the party’s National Executive Committee (NEC) at its meeting on September 8, 2022.

According to a source, the National Working Committee (NWCsenior )’s members met on Monday to discuss stopping the attempt to remove Ayu from office.

According to an another source, supporters of Governor Wike are considering bringing legal action to contest the election of Ayu.

When asked about the purpose of the meeting, the source responded, “The NEC meeting will take place this Thursday, and they will decide on Ayu’s matter. We are aware that some NEC members believe Ayu should leave. The party’s biggest day is Thursday, which will either make or break the event.

Ayu intends to delay having him removed from office.
Ayu, the PDP’s national chairman, intends to prevent NEC members from considering the demand that he leave the meeting.

PDP Governors, according to a source, would attend the meeting. The source also said that if anyone called for Ayu’s resignation, Ayu would respond that it wasn’t on the agenda.

According to the source, those pushing for Ayu’s resignation are preparing to sue him.

They intend to argue that Ayu was not elected but rather was chosen, according to the source.

The source went on to say that if the court case fails, those who made the call might use an intermediary channel by encouraging NWC members to cause problems for Ayu.

Related Topics:PDP To Determine Ayu's Fate in 2023 Party Chairman Planning To Stop Move On Thursday
Up Next

PDP and APC Crisis: A Blessing In Disguise For The LP in 2023