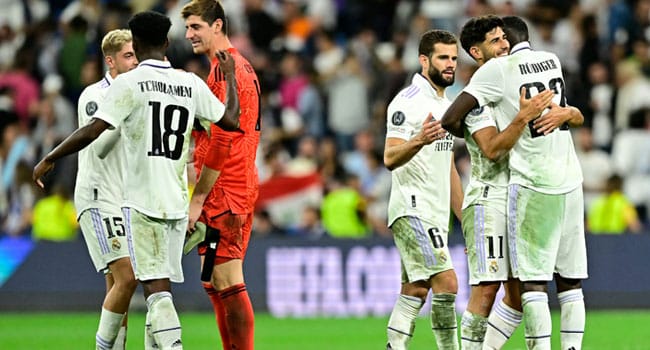 It threatened to be a frustrating night for the record 14-time winners and reigning champions until Valverde finally provided the breakthrough, continuing his fine recent form and celebrating emphatically in front of a relieved Santiago Bernabeu after netting in the 80th minute.

Substitute Asensio then slammed home the second in stoppage time after Toni Kroos pulled a short free-kick back to the edge of the box. That wrapped up the win and kept Madrid top of Group F on six points, ahead of Shakhtar Donestsk on four.

Leipzig had tested Thibaut Courtois early on when Christopher Nkunku broke down the right flank and squeezed off a shot from a tight angle. At the other end Rodrygo dragged a strike wide of the near post.

The Brazilian forward, playing as a false nine in the absence of injured talisman Karim Benzema, was chosen over Eden Hazard and Asensio for the role after impressing against Real Mallorca last weekend in La Liga.

There were half-chances at both ends for Timo Werner and Eduardo Camavinga, before the best opportunity of the first half fell to Madrid defender Antonio Rudiger, who steered a header well wide of goal from a dangerous position in the box.

Luka Modric tumbled under heavy pressure in the area shortly before the break but his appeals were waved away, to the chagrin of Madrid’s increasingly frustrated fans.

The forward was whistled by some sectors of the Bernabeu after he had shown his frustration at not being given more game time this season on the side of the pitch during the win over Mallorca.

The hosts’ angst grew when Vinicius, the scorer of last season’s Champions League final winning goal against Liverpool, was denied by Peter Gulasci from close range after Valverde had barrelled into the area in typically intense fashion.

Madrid broke the deadlock when Uruguayan midfielder Valverde, deployed on the right of the attack to great effect, cut inside and curled home with his weaker left foot.

It was his third goal in six games, following strikes against Celta Vigo and Mallorca, with the 24-year-old continuing to show why he is preferred in the position.

Asensio also staked his claim with his late contribution to offer Ancelotti and his detractors in the stands food for thought.

Haaland Haunts Dortmund As Man City Come From Behind