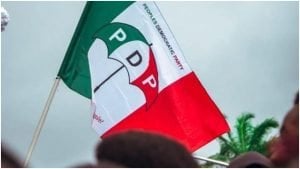 The former House of Assembly member also wrote a letter on Thursday informing Sen. Iyorchia Ayu, the PDP National Chairman, that he was leaving the opposition group.

He delivered the letter through Sikirulai Ogundele, the PDP’s chairman for Ogun State, and stated in it: “I humbly write to advise Your Excellency of my decision to quit as the state Deputy Chairman of Ogun State and as a member of the party.

Odunjo left the party without providing a clear justification.

But he admitted that his decision to leave the PDP was “personal and divine.”

On the PDP ballot, he was twice elected to the Ogun State House of Assembly.

At various periods, he has run for the party’s candidacy for senator in the 2019 election, the House of Representatives, and the governorship.

Odunjo predicted that this will surprise a lot of party members. He expressed gratitude to Ogundele and the other members of the State working committee for their support and their shared love.

Ado-Odo/local Ota’s government official said: “It was great working with you guys. I’m going to miss you guys.

Related Topics:departs from the organization.OdunjoThe Ogun PDP's deputy chairman
Up Next

Ikpeazu urged Abians to focus on improving the state’s infrastructure rather than pursuing Wike.