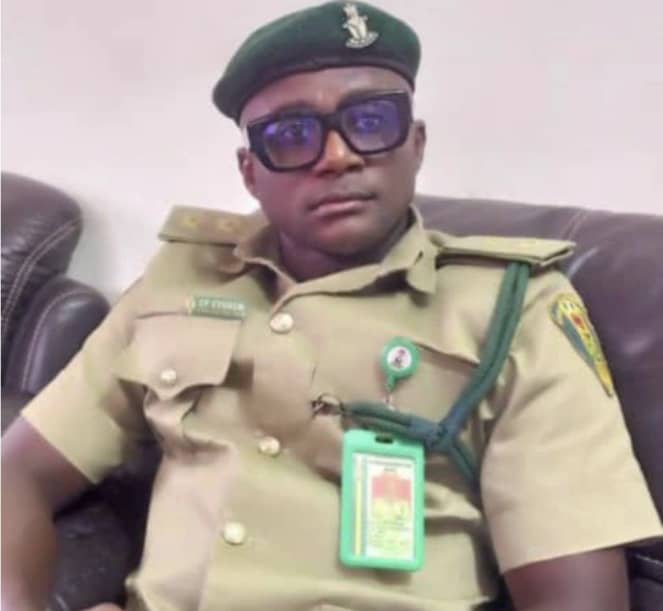 The Nigerian Correctional Service personnel who tortured lawyer, Inibehe Effiong has been identified.

Nigerian lawyer and activist, Inibehe Effiong has shared a photo of the Nigerian Correctional Service personnel that tortured him.

He took to Twitter to release the photo and wrote:

ENOBONG PHILIP EYOREN: THE NCS OFFICER WHO TORTURED ME AND HIS THREAT TO “FINISH ME”

I did not offend Enobong Phillip Eyoren, also known as Gideon Eyoren and goes by the Facebook name Kasiano Kasiano in anyway. Eyoren is an Assistant Superintendent 1; a two star officer in the Nigerian Correctional Service (NCS) working at the Ikot Ekpene Medium Custodial Centre as a Correctional Officer (warder). He is an indigene of Ikot Nko, Ididep, in Ibiono Ibom Local Government Area of Akwa Ibom State.

Eyoren tortured and subjected me to the most humiliating and traumatic experience of my life for merely asking that the Assistant Controller of Corrections in Ikot Ekpene prison, ACC Edet Akpan, should give me time to arrange myself and have my bath, as I was not a criminal, when they wanted to transfer me from Ikot Ekpene to Uyo prison on the 10th of August, 2022 which he took as an insult. ACC Edet Akpan angrily left and immediately unleashed Eyoren to deal with me. He knows why he choose Eyoren for the ‘job’.
I never offended Eyoren or looked for his trouble. Prior to 10th August, 2022, I never had any form of confrontation or conversation with him.

Yet, Eyoren treated me in the most violent, insolent and vindictive manner.

As he was torturing me, he kept taunting me to look at his name. He said nothing would happen. He said repeatedly that he was going to “finish me” (a threat to my life). He even had the audacity to make a video record of me while I was being brutally shaved.

He insisted that my beards and the hairs on my head should be completely shaved. Even when the barber (an inmate) whom he brought and ordered to shave me against my wish wanted to stop, he shouted at him to shave me completely and was mocking me as I sat on the dirty bare floor.
The current hairs on my head and the little beards that you’re seeing on me presently started growing from 10th August. I was completely shaved.

I expressly told Eyoren that I didn’t want to be shaved, but he became more violent. If I had physically resisted him, only God knows what would have happened.
Eyoren grabbed me by the neck with the help of another officer, and they both dragged me by the neck from my cell in Ikot Ekepene Custodial Centre to outside where a van was stationed. I could barely breath.

Even though two armed officers were also seated in the back of the van, Eyoren chained my left hand to the van. All the officers in Ikot Ekpene came out and were watching. Officers who pleaded with Eyoren to treat me with decency were snubbed.
Was I going to run or what? If he thought that I could jump out and escape, why didn’t he just allow me to sit inside the van? Why did he have to chain me to the van like a dog despite that I didn’t resist in anyway? He didn’t even allow me to button up my shirt.

Amb Armstrong Moses, a fellow inmate who was in the front of the van, pleaded with him to allow me to come to the front since there was space. But Eyoren rebuffed him. By the way, Moses Armstrong’s beards are about five to ten times more and longer than the beards that I kept before Eyoren had me shaved. Armstrong left the prison with his beards fully intact. Even Uduak Frank Akpan, who was convicted for the murder of the job seeker Iniubong Umoren had beards the day I arrived at the Uyo Medium Custodial Centre.

But how do I forgive a man who publicly violated my person and has not apologized publicly? I made it clear to the authorities of the Correctional Service that I wanted genuine remorse. Instead of apologizing to me publicly, their Public Relations Officer (PRO) in Akwa Ibom, Richard Metong, has been busy issuing false and provocative public statements against me. He publicly denied that I was tortured, and even claimed that I consented to be shaved, and that it was for security reasons. Where then is the genuine remorse?

What I want is not peace; what I want is justice. No matter how powerful or violent you may be as a cultist, you should not believe that the whole world is afraid of you and as such you can do whatever you like to anyone without consequences.

Eyoren thinks that he is invincible. He believes that he has the capacity to unleash violence and that there is nothing that anyone can do to him. I cannot easily forget how he repeatedly taunted me to look at his name. He went further to say to me:
“You think that I am your Chief Judge, I will finish you”. This is someone who knew nothing about what led to my imprisonment.

I want justice, not just because of what he did to me and his threats to my life, but because other citizens, inmates and the members of the public in general are also potential victims of his inclination for violence.

Eyoren has in the past been transferred from Uyo prison to Eket prison, and from Eket prison to Ikot Ekpene prison where he currently serves for various misconducts. They keep covering him up.

Is it because he is “a very dangerous man” as I have been repeatedly told, or because the authorities in the Correctional Service are using him for nefarious activities?
Those working in the Correctional Service should be people of high moral standing.
Eyoren should explain to Nigerians how and when he plans to ”finish me”. I am putting out his photos and this additional information for the world to know that this Eyoren threatened my life while assaulting me, and is yet to be punished for what he did to me.

Related Topics:The NCS Officer Who Tortured Me - Inibehe EffiongThis Is Philip Eyoren
Up Next

Plaintiff claims a violation of a land order.