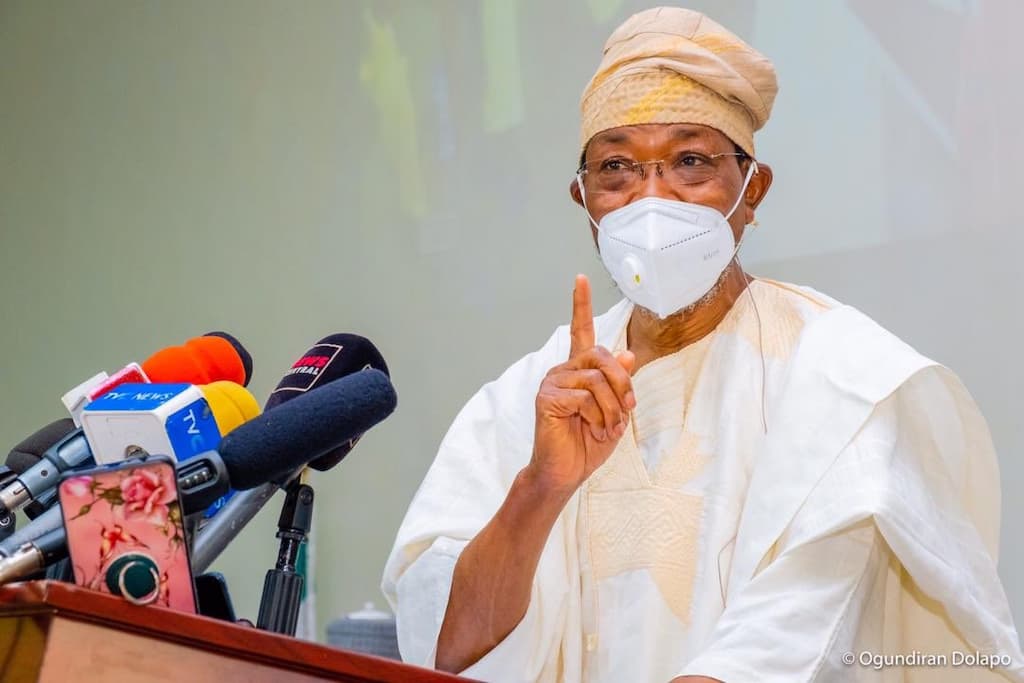 **Says worst of insecurity is over

The federal government has said that it will eliminate all terrorists by December this year. The Minister of Interior, Rauf Aregbesola, said this in Abuja yesterday during a joint security press conference with the Ministers of Defence, Information and Police Affairs as well as the Chief of Defence Staff.

Aregbesola said: “Nigerians have the assurance of all of us that their security is guaranteed. So, we’re here to assure you that you’re safe, that is why we’re here from the instructions of the president that you’re safe and that each day going to December, our safety and security will be better.

“What we face mostly now are clashes of cowardly attacks from those that have been routed in one locality or the other moving to give a false impression that they’re still strong. Our ultimate goal is to eliminate them altogether and restore total peace in every inch of the Nigerian soil; that we’re going to do by God’s grace, by December of this year.

“It is sounding tall but take it home, we’re determined to ensure that every inch of the Nigerian soil is safe. The determination is there and the order has been given.”

He said the current security challenges were exacerbated by the restrictions and deprivations of COVID-19 despite the government’s ameliorative measures.

“But we shall continue to protect the lives and property of Nigerians and foreigners in our midst. We shall continue to work for the peace of the nation and deter elements that constitute threats to the people. We shall bear the full powers of the government to secure every inch of our land. We shall not rest until peace is fully restored in Nigeria,” he assured.

Our worst moments over – Lai Mohammed

The Minister of Information and Culture, Lai Mohammed, said the worst was over as the government had now put the terrorists, bandits and their ilk on the run.

According to him, “It’s undoubtedly the greatest challenge to the peace and security of our great nation since the civil war from 1967 to 1970.

“It is the kind of challenge that would have overwhelmed many nations, but thanks to the purposeful leadership of President Muhammadu Buhari. We can say, I want to repeat that the worst is over and peace and security are gradually returning to the land.

“Please don’t misunderstand or misrepresent this assertion. We may still witness isolated cases of security challenges here and there, but it’ll not be on the scale that we have witnessed in the past.

“Terrorists and bandits and co can run but cannot hide, and this has been demonstrated by the arrest of those who attacked a church in Owo. These criminals can run, but cannot hide, as we’ve seen in the decimation of the cowards who ambushed the Brigade of Guards troops in Abuja.”

He stressed the government was “Not saying the battle is over. No. What we’re saying is that our military and other security agents have been able to contain the daunting security challenges we face and that the worst is indeed over. We have now put the terrorists, bandits and their ilk on the run and we will not relent until they have been crushed.”

Mohammed appealed to all Nigerians to continue to support the security agencies in their onerous task of keeping the country safe.

“We must also realise that security is the business of everyone, hence the tagline ‘if you see something, say something.’ Terrorists or bandits are not spirits. They’re human beings, and some of them reside in our communities. They must all be exposed and crushed for peace to reign.”

‘Media should amplify our successes’

The information minister urged the media to give a big play to the recent successes recorded by the security agencies in tackling terrorism, banditry, kidnapping, separatist violence and oil theft, among others “Just as they gave prominence to the reporting of the security challenges at their peak.

“It’s instructive that when the terrorists and bandits strike, they get very prominent mention in the media, but when the security agencies hit them hard, as they are doing now, a section of the media suddenly goes quiet. This is not helpful for the morale of the fighting forces and even the citizens.”

The Minister of Defence, Bashir Magashi, said the critical military objective of the total defeat of the terrorists in the North East was already being achieved.

He said while areas where terrorists hitherto had some freedom of action were being cleared, socio-economic life was gradually returning to most parts of the North East.

Magashi said in the South South, the security agencies had prevented crude oil theft worth over $500m over the past few months.

He said the South West was the most peaceful zone though recent terrorist activities had tended to redefine the situation in the zone as cases of kidnapping for ransom, armed robbery, pipeline vandalism and petroleum products theft, cultism and smuggling had occasionally constituted security threats there.

He said Operation AWATSE was being conducted mostly in Lagos and Ogun States to tackle pipeline vandalism and petroleum products theft as well as sea robbery.

The Minister of Police Affairs, Muhammad Maigari Dingyadi, noted that counter-terrorism and counter-insurgency “Is not a fair fight as the terrorists have no responsibility, unlike the government and its institutions and as such, are free to employ any tricks and tactics, no matter how dastardly.

“So, each new asymmetric threat arises in its own context to present fresh set of operational challenges.”

He, however, said the security situation in Nigeria had been reasonably stable despite the activities of criminals around the country.

He said daily situation reports in the last two months had shown relative peace on many of the highways, including the Abuja-Kaduna, Kaduna-Birnin-Gwari, Sokoto-Zamfara and Zamfara – Kaduna roads.

He said the near total absence of patriotism on the part of most citizens in their failure to report cases as well as the occasional lapses in the criminal justice system to effectively sanction offenders contributed to the basic security challenges in Nigeria.

He said crimes had assumed a fluid nature such that it was becoming increasingly difficult to geo-locate crimes.

“We find that there is a general similarity in the pattern of crimes across the six geo-political zones in the country. Armed robbery, kidnapping, unlawful possession of firearms, acts of terrorism etc., happen in almost all the states of the federation,” he stated.

Fielding questions from journalists later, the police affairs minister said since 2019 when Buhari directed the police to recruit 10,000 police officers, over 30,000 had been recruited since then, assuring that the last tranche of 10,000 would be done later this year or early next year.

In the same vein, Aregbesola during his presentation said there were a total of 75,601 inmates, including 1,271 military detainees, in all the nation’s custodial centres.

He said of the convicts, 3,150 were on death row awaiting execution “Because state governors have not assented their execution warrants.

“From the above figures, one of the biggest challenges we have in the custodial facilities, therefore, is the awaiting trial persons constituting a whopping 75 per cent of the inmates’ population and disproportionately usurping resources and space.”

He appealed to state governments to speed up the justice delivery system so that justice would be quickly delivered to those awaiting trial.

In separate interviews with one of our correspondents last night, two security experts, Chukwuma Ume and Lawrence Alobi, maintained that the growing level of inequality between rich and the poor, as well as the rise in poverty level, may hamper the government’s projection of ending terrorism by December.

According to Ume, a security sector reform expert and official of the United Nations Development Programme, in as much as the federal government was banking on a kinetic approach to end the problems, focus should also be shifted to Nigeria’s structural problems.

He said, “Yes, for a layman, a kinetic approach is most deserved because they also want to get done with this, they want the government to show force, show efficiency and control of the situation.

“While it engages in dialogue, rehabilitation and re-integration, the government should, much more than all these, ensure that structural problems leading to unemployment, leading to agitations or separatists’ tendencies, leading to exclusivity rather than inclusivity, should be addressed.

Alobi, a former Commissioner of Police in the Federal Capital Territory, described the government’s optimism as “vain imagination”.

“The minister knows that what he’s saying is not true. How many years have we been fighting terrorism in the country, and he’s talking about December! That remains just a mere wish. I doubt he understands what is really on ground. Maybe he’s just trying to re-assure Nigerians of confidence-building.”

Related Topics:We’ll Eliminate All Terrorists By December – FG
Up Next