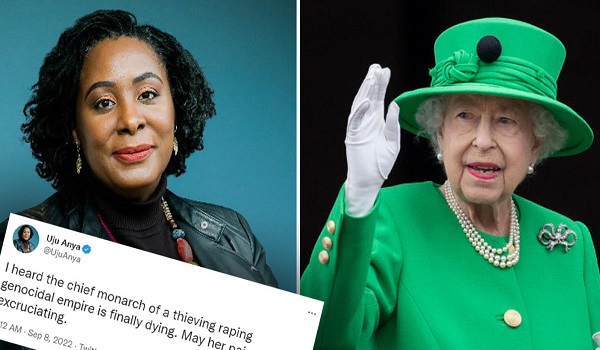 Professor Uju Anya, a Nigerian-born woman who caused a stir by wishing the late Queen Elizabeth II a “excruciating” death before the longest-reigning monarch in British history died away, has given an explanation for her venomous remarks.

Twitter removed the message after receiving numerous complaints for breaking the prohibition against “wishing or hoping that someone experiences physical harm.”

The university where the professor teaches also stated that while it supports “free expression,” it does not agree with the professor’s opinions.

Uju had claimed that Queen Elizabeth II had supported the “genocide” that had caused her family to be uprooted.

Explaining why she made the tweet which attracted backlash, Anya in an interview with a foreign-based news outlet — The Cut, described Queen Elizabeth as “representative of the cult of white womanhood.”

She said: “On Thursday, I was just reading the BBC, which had been making announcements that there were worries for the queen’s health and death was imminent.

“It brought on a whole lot of emotions and pain — primarily pain — about who this monarch was and what she represented, not just in the broad sense of what her throne represents, the legacy of enslavement and colonialism, but also the direct harm.

“People say, “Oh, she’s just a figurehead, she didn’t really do anything,” as if she’s somehow withdrawn from this. They tell me, “You’re talking about colonialism. Was that even in your lifetime?”

“My experience of who she was, and the British government she supervised, is a very painful one. The harm shaped my entire life and continues to be my story and that of the people she harmed — that her government harmed, that her kingdom harmed, however you want to frame it.

“The genocide of the Biafra killed 3 million Igbo people, and the British government wasn’t just in political support of the people who perpetrated this massacre; they directly funded it. They gave it political cover and legitimacy.”

Speaking on the response of Jeff Bezos to her tweet, she said: “Jeff Bezos incited violence against me. He rarely tweets in his own voice, but he took the time to single me out when literally half the planet rejoiced over the news.

“I can’t ignore the racism and misogyny — the emails I’ve been getting all start with the N-word, bitch, genetically inferior, all kinds of things. I don’t open them, but I see the subject lines.

“I did not wish for her death in my tweet. I didn’t order anyone to murder her. I didn’t say anything other than to wish her the suffering in death that she brought to millions of people. No apologies will be forthcoming from me. I maintain my position.

“As a direct recipient of her governance and as the child of colonial subjects, I reserve the right to say what this woman’s life and monarchy and the history of the British monarchy as a whole means to me. “Speak no ill of the dead” is a weapon that’s leveled against the oppressed to silence them, to lionize oppressors, and to sanitize their history. What respect am I supposed to have for her, for her family? “Oh, well, her family is mourning her.” My family is mourning as well.”

Advertisement
Related Topics:Why I longed for a "excruciating" death for Queen Elizabeth II – Uju Anya
Up Next

Fani-Kayode: While Obi was hawking tomato ketchup, Tinubu, had already paid his dues.