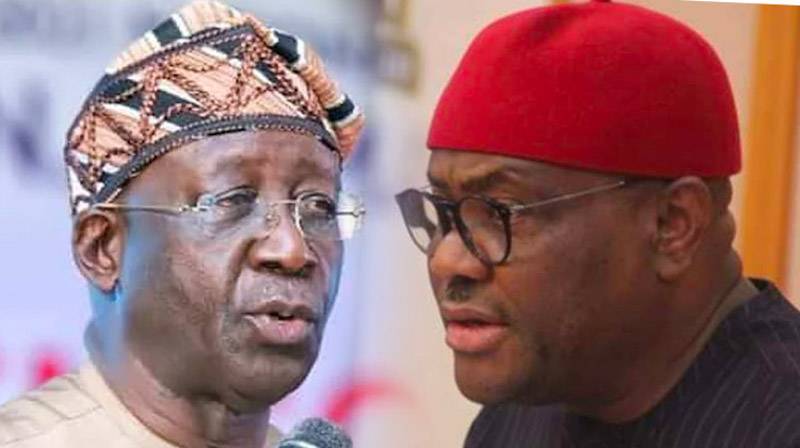 Being elected president of the Federal Republic of Nigeria is a difficult feat. And knowing this helps to explain why all of the presidential candidates are likely facing one of their most challenging political periods.

Undoubtedly, among the three leading candidates, Atiku Abubakar, the former vice president running on the Peoples Democratic Party (PDP) platform, has the hardest job. If he must return to Aso Villa, which he left in 2007 as the vice president to former President Olusegun Obasanjo, he will have to overcome the opposition of Rivers State Governor Nyesom Wike.

While Wike’s challenge initially appears unimportant, he is actually hydra-headed and will eventually act as a door leading to either Atiku’s victory or failure. Wike has numerous more problems, all of which will be covered in this paper.

Why is Wike so oversized? The Rivers State governor represents the interests of all party members who have been wronged, not just those who share his viewpoint. Wike continues to be the thread that connects them all, from the South that was planned out of the 2023 presidential campaign to the ascent of Peter Obi of the Labour Party and romance with the ruling party, among other petty political Lilliputians seeking importance.

His equivalent governors and certain National Working Committee members are also among Wike’s allies (NWC). Therefore, it is significant to claim that Wike has divided the conflict into a South-North conflict.

In short, Atiku must prevail in this internal conflict before confronting Bola Tinubu of the All Progressives Congress (APC) and Peter Obi of the Labour Party, his rivals in the race for the presidency. He would have triumphed in half of the upcoming fights if he could eventually convince Wike to join him.

Rise of Atiku and Okowa

As soon as Atiku became the leader of the largest opposition party, the fight for his support began. The procedure that brought him here, not the status, is what presents a problem.This doesn’t affect only him, his running mate, Governor of Delta state, Ifeanyi Okowa is also in the picture.

Prior to the PDP primary election in Abuja, in late May, Wike had pledged to support whoever emerged as the party’s flag bearer. He also assured he wouldn’t leave the party, regardless of what happened.

It was almost certain to conclude that Wike would emerge to fly the party’s flag going by his political muscle. Sadly for him, his colleague from Sokoto state, Governor Aminu Tambuwal withdrew from the race and urged his delegate supporters to vote for Atiku. This, obviously won the battle for the ex-vice President. Wike was obviously outplayed by a ‘friend’.

Rivers Governor could stomach Atiku’s victory at the primaries, but his ego was bruised when his neighbour in the South-South was picked to be the vice presidential candidate. Up till now, Wike has neither publicly congratulated Okowa nor commented on the issue.

Asides from other grievances that sprang up aftermath of the emergence of both Atiku and Okowa, Wike has admitted that his main rancour with PDP leadership is the failure of the party’s national chair, Senator Iyorchia Ayu to resign.

He claimed that there was an agreement during the zoning debate that both the presidential candidate and the national chairman cannot come from the same region.

Since Atiku is from the North, Ayu cannot remain as the PDP helmsman because he also hails from the North. Notwithstanding the resignation of Walid Jibrin as the chairman of the Board of Trustees (BoT), Wike insists Ayu must go. Amid this, members of the National Executive Council (NEC) passed a vote of confidence on Ayu. As much as Ayu remains as PDP chairman, Wike cannot work for and with Atiku.

Whatever Atiku calculated to have chosen Okowa as his vice ahead of the 2023 general elections has arguably boomeranged. This has divided his votes in the South-South already unless the internal wrangling is resolved amicably before Nigerians head to the polls next year.

In the wake of the brawl with the Atiku camp, Wike, while commissioning recent infrastructural projects in his state. Imaintained that he would help PDP not to win elections. This will only change if his demands are met.

But, Atiku must hold on to the belief that the South-South region is a cherished stronghold that would give him votes in the South. By extension, he should strategise not to let Rivers slip away from his grasp even if it means sourcing for a powerful figure in Wike’s state.

Rivers will deliver for Atiku because, in the 2019 presidential elections, Atiku scored 473,971 votes against Buhari who polled 150,710 votes.

However, while Wike’s clout cannot be underestimated in Rivers, Atiku can rake in massive votes in the region including Wike’s state if he plays the game well. The states in the region with the exception of Cross River belong to PDP. He just has to work with Okowa and find a charismatic party chieftain to be on his campaign train.

The region is for Tinubu except for Oyo state just like the South-South is for Atiku. But this doesn’t mean there won’t be trickles to gather for both of them in each region.

Going back to Tinubu’s tactics at his party’s primaries, Wazirin Adamawa can adopt such a strategy by enticing the bigwigs in Southwestern Nigeria to his camp if he wants to defeat the national leader of APC in his backyard.

On September 14, 2022, Atiku met with Oyo state governor, Seyi Makinde who is also Wike’s closest ally. Atiku knows he needs Makinde if he has to get a substantial number of votes from South-West. Makinde wanted what Wike wanted. Don’t forget that Wike is a door. Atiku can decide to open or shut.

Also, by February 2023, Osun state governor-elect, Senator Ademola Adeleke would have assumed office, but it is not certain if he would have garnered the political experience to deliver large votes for Atiku.

The Middle-Belt of Nigeria is another PDP’s biggest armoury if Atiku’s political antenna is receiving a signal. He must woo another Wike’s ally and staunch critic of President Muhammadu Buhari’s government in the person of Governor Samuel Ortom of Benue state. Ortom lamented a few days back that all is not well with PDP.

Whether Atiku sidelines Ortom or not, he has the shoulders of the former Senate President David Mark to ride on. Mark is a big fish in Benue politics. It is noteworthy that Ayu is also from Benue, and Atiku might not succumb to Wike’s threat of sacking Ayu. It is resourceful to use his status in gaining prominence in the state and the region at large.

Other states in the North-Central, especially those plagued by the atrocities of killer Fulani herdsmen will embrace Atiku and this might smoothen his cruise to victory in 2023.

Kogi and Kwara states are APC states but Atiku can use his influence to wage war against them in dividing the votes. The heavyweight ranks of former Kogi Senator who is also Atiku’s spokesman, Dino Melaye and former Senate President, Dr Bukola Saraki are strong waves to ride on.

South-East, Igbo presidency and the ‘Obidients’

Any politician that jettisons the wave of the Labour Party’s presidential candidate, Peter Obi does so to his detriment. Obi is not only the Igbo presidency that the region longs for, he’s a political figure that the disgruntled young Nigerians want to install via their votes in 2023.

It is expected that Tinubu and Atiku understand this. How they would surmount that hurdle is a test of their acumen. The former VP cannot convince Igbo men with ‘Okowa is also an Igbo’ status to lure their votes.

Although, the Ohanaeze Ndigbo has reiterated that it would have preferred that APC and PDP choose a Southeasterner to vie for the highest political office.

The Igbo leaders wanted a repeat of 1999 when PDP and defunct All Peoples Party (APP) fielded Obasanjo and Chief Olu Falae respectively who are Yoruba people.

And since Ndigbo didn’t get this, the ethnic sentiment that Obi is more Igbo than Okowa is a card to play. An Atiku would struggle to win this debate.

The Obidients are also everywhere. They are the youths that want to pay back APC and PDP in their coin for many years of the nation’s woes. These are energetic and resolute Nigerians who are ready to share spoils with Atiku and Tinubu for Obi’s advantage.

Having said this, Atiku cannot totally lose out in the South-East, another former Senate President, Anyim Pius Anyim and the new Board of Trustees (BoT) chairman, Adolphus Wabara will not hesitate to embrace Atiku to oust the APC government.

The core North, despite APC’s damage to security and economy, will still most likely queue behind Tinubu who is promising a facelift of Nigeria in the pattern of Lagos when he was governor and other gimmicks he and his party will push out to Nigerians.

Tinubu’s victory depends in large part on governors from Kaduna, Kano, Katina, and Zamfara states including Nasir el-Rufai, Abdullahi Ganduje, Aminu Masari, and Bello Matawalle. The votes of Kano are crucial. Buhari won 1.4 million votes in 2019 by a landslide.

Whoever controls Ganduje between Tinubu and Atiku also controls those Kano voters’ votes. It’s also crucial to consider if Atiku would receive a sizable portion of those votes.

On the basis of being a son of the soil, Atiku may debate Tinubu. He is from the North. He has the ability to play on the ego and sentiment of the Northern political class and local stakeholders.

The most well-known politician in the North-East is Atiku. For him, this would have been a free ride, but Tinubu selected previous, former governor of Borno state, Senator Kashim Shettima to spoil the show for Atiku.

The North-East must be the ex-permanent VP’s residence. He must run a strong campaign to undermine the APC especially in the dangerous Borno region. He is a politician who understands the targets of his political campaigns.

Way ahead
Kwankwaso, “the lovely bride”

As crucial as Kano’s votes are to winning the presidential election, Rabiu Kwankwaso, the state’s former governor, is a significant investor. His Kwankwasiyya movement has garnered him a sizable following.

Kano’s votes have always gone to whoever Kwankwaso supported, but this time the former defense minister is standing for president under the New Nigeria Peoples Party (NNPP). Atiku, Tinubu, and Obi should virtually certainly disregard Kano as a deciding factor in the election if he refuses to resign.

There are rumors that Kwankwaso will support one of the three front-runners in the final moments, and Atiku may need to make a pitch to win him over.

The votes belong to Nigerians.

The disgruntled, hopeful, and optimistic Nigerians who demand and demand a better, safer, richer, and greater country and would do everything within their power to achieve this are largely responsible for the 2023 presidential election. They are the target audience for Atiku. He needs to win over these voters. He would undoubtedly exploit APC’s shortcomings against them. He requires more, though. Nigerians seek out realism.

Political analysts have agreed with the Independent National Electoral Commission (INEC) that it would be challenging for politicians to rig elections in light of the new Electoral Act. Therefore, Atiku and the other contenders in the race must recognize and accept the fact that 2023 is for Nigerians.

However, it is up to Nigerians to decide whether to maintain the current quo or undergo a paradigm shift. In any case, Atiku faces a greater obstacle to victory than Tinubu and Obi. He has run for office five times since entering politics in 1989: in 1993, 2007, 2011, 2015, and 2019. And he is the only one who is aware that 2023 may be his final opportunity.

Related Topics:Why Wike is still the key to Atiku's victory or failure in 2023
Up Next

Hearing on lawsuit aiming to invalidate Atiku’s candidacy is halted by a lawyer’s absence.