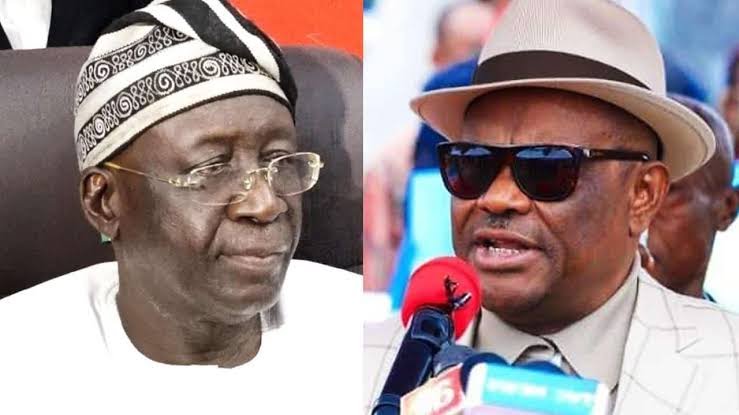 Governor Nyesom Wike of Rivers State and his Peoples Democratic Party (PDP) allies met in Port Harcourt on Tuesday night to finalize their position ahead of the 2023 general election.
Governor Seyi Makinde of Oyo State, Governor Okezie Ikpeazu of Abia State, Governor Samuel Ortom of Benue State, former Governor Ayodele Fayose of Ekiti State, former Governor Donald Duke of Cross River State, and others are among those in the Wike Camp, according to Track News.

According to reports, the Wike Camp decided to hold the meeting in response to the National Executive Committee’s (NEC) contentious vote of confidence in Dr. Iyorchia Ayu as national chairman, despite their demand for his resignation.

The Rivers governor, according to The Nation, called the late-night meeting.

According to reports, the governor’s camp has six options. They are as follows:

Accept the status quo and work with Atiku Abubakar, the party’s presidential candidate;
To demand the dismissal of Iyorchia Ayu and to withdraw from the 2023 election if Atiku refuses to bend to pressure; To remain in the party and work against it; To form a covert alliance with the ruling party to demonstrate its strength as a Caucus in the PDP; To leave the party; and To refuse to fund the party at all levels.
“Wike group is meeting tonight (Tuesday night) to make a major decision,” a source in Wike’s camp said.

Another source at the meeting told Track News Nigeria, “The likes of Okezie Ikpeazu, governor of Abia, and Samuel Ortom of Benue are not present, but they sent word that they will abide by the meeting’s outcome.”

The outcome of their meeting on Tuesday, according to the source, will determine which presidential candidate they will support in the upcoming election.

Related Topics:and Others Could Join PDP CrisisIkpeazuOrtomWike vs. Ayu: Six Alternatives Makinde
Up Next

Lawan is out as Akpabio and Umahi make the final INEC list.