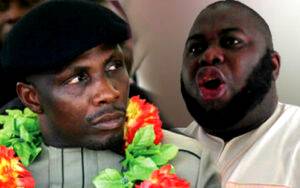 Government Ekpemukpolo, better known as Tompolo, of the Movement for the Emancipation of Niger-Delta (MEND), has been warned by Alhaji Mujahid Dokubo-Asari, a former member of the Niger-Delta People Volunteer Force (NDPVF), not to approach any pipelines in the Kalabari region of Rivers State.

His comments come after the Federal Government recently gave Tompolo a contract for the security of a pipeline. In connection with the pipeline surveillance contract in Rivers State, Dokubo-Asari bragged in a viral video that he would serve it hot to anyone who entered his Kalabari homeland, according to a recent video seen by Track News, accusing the Minister of State for Petroleum Resources, Chief Timipre.

Because you are an Ijaw man and the only one who knows how to chop (eat), Dokubo-Asari stated, “You (Tompolo) took pipeline contract in Delta, your place, and then you come to Kalabari to take pipeline contract.”

“You remove from the territory of the Gbaramatu people, taking the Itsekiri people’s (part), the Urhobo people’s (piece), the Isoko people’s (portion), the Kwale people’s (portion), and taking all.” You travel to Kalabari after taking your entire share of Bayelsa. Did I clip Timipre Sylva’s wing when he was a member of the House of Assembly because he wants to clip mine? ”

“I am older than he is. When he was governor, did I clip his wings? That I am becoming too powerful, so he connived and gave pipeline contract so that he will destroy what we are doing to make the government he is part of, stable.”

“Therefore, he brought Tompolo and Tompolo gathered people and told them he would buy guns and give them. Let them come. I am not boasting. I think soldiers will guide him here. Let them come. I did not talk about Rivers state. I said Kalabari. They cannot take it. Let them take any place they like, not Kalabari.”

He disputed claims that Tompolo had saved him and questioned, “Where did Tompolo save me? I am the one that kept Tompolo alive. People realize they are still alive. Tompolo departs Oporoza, right? Does he not recognize me? saved me, and how?”

“I brought my belongings there. I went out with my men to fight them. I requested for my belongings back, but they wouldn’t give them to me. I received 48 firearms from Tompolo, which I carried with me. Was there even one person they gave me? In 1998/1999 and 2003, I relocate my boat, my weapons, my rocket launchers, and my General Purpose Machine Gun (GPMG), accordingly.

“My veins carry Igbo blood, thus that is what it is. I come from a family of five educated generations, and I attended school when some of you were living in the jungle. They are the ones who have betrayed the Ijaw people, if anyone. The NDDC, or Niger Delta Development Commission, has passed away today.”

These are the traitors and villains who have kept Ijaw land in this condition because they thought they deserved to have all at the expense of others. You claim that Tompolo saved your life; how? Did you hear that the Army had already penetrated my camp while we have been fighting? ”

In just three days, they destroyed his Camp-5. Did you hear the army since we started fighting? The army has been in Camp-5, a military base, up until this point.

Related Topics:Asari Dokubo warns Tompologenerating a commotion in the N'Delta.You won't seize Kalabari
Up Next

Why Soludo should rename the airport in Anambra