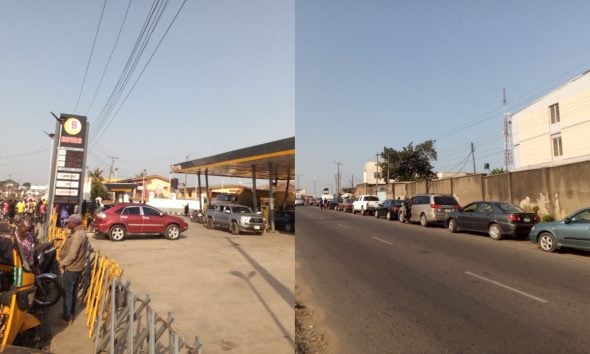 Retailers of petroleum usually referred to as black marketers are currently “cashing out” in Ibadan, the Oyo State capital as the scarcity of petroleum in the city worsened.

Ibadan has been experiencing fuel scarcity for the past four days with the majority of petroleum stations shut down, leaving only a handful selling a litre of petroleum between N195 and N350.

Track News survey showed that BOVAS was the only fuel station selling a litre of petrol at N180 in Ibadan on Wednesday.

Track News correspondent who went around the city observed that the few branches of BOVAS selling the product have long queues of cars and motorcycles.

Some of the areas visited included Bodija, Secretariat Road, Sango and Eleyele Road.

The scarcity of fuel forced most motorists to hike to resort to patronising black marketers who are selling at the rate of N500 per litre.

While black marketers are making brisk businesses by inflating the price of the product, petroleum attendants, on the other hand, were observed extorting buyers.

In some petroleum stations, petroleum attendants are collecting N200 per vehicle before they sell the product. In other stations, they demanded N500 before selling the product to motorists

Diaspora remittances to Nigeria and other SSAs slow — World Bank