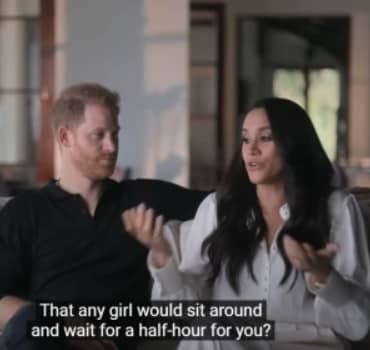 Meghan and Harry have shared the first intimate messages they exchanged before they went on a first date.

In their new Netflix series, the first episode called “The first date” sees the Royal couple share how they met each other and went for drinks whilst she was visiting London in the summer of 2016.

The new series on Netflix shows some of the first messages they exchanged.

Her friends said: “It was the summer of 2016, Meghan had planned to travel around Europe and having a ‘single girl summer’ and she wanted to be ‘free’.”

Meghan said: “I was really intent on being single, and just having fun girl time.

“I had a career, I had my life, I had my path, and then along came H. Talk about a plot twist.

“I was scrolling through my feed and someone who was a friend had a video of the two of them on Snapchat.

“It was the dog ears, that was the first thing.”

Meghan then said she received an email from a friend, who said: “Between you and I, thought you might want to know this being newly single and all.

“I put our Snapchat on Instagram and Prince Haz follows me (he’s a friend) he called me last night dying to meet you. Hehehehe.

Advertisement
Related Topics:Harry and Meghan share intimate messages they sent on social media where they met
Up Next