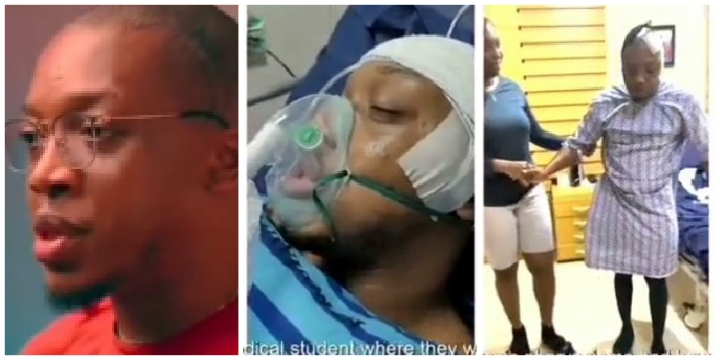 A popular twitter user, Chinonso Egemba aka Aproko Doctor, has opened up on a health challenge he faced in the year 2022.

The popular medical doctor revealed that he suddenly discovered that he went blind in one eye and was later diagnosed with a brain tumor in December 2022.

Sharing his predicament via a video on Instagram and other social media pages, Aproko Doctor explained that it all began when he realized that he had lost sight in his left eye.

He stated that he visited a hospital for consultation and it was discovered that a tumor was pressing down on the pituitary gland in his eyes.

He said he had to undergo surgery to take the tumor out.

Ubi Franklin’s babymama, Sandra Iheuwa, has taken to Instagram to announce she is in love again with a mystery man.

Tracknews reports that this is coming barely a year after her five-month-old marriage to her ex-husband, Steve Thompson crashed over alleged infidelity.

Sandra who welcomed a baby boy in 2022 revealed she would be hiding her new lover like ‘Pallatives’ unlike the public display of affection she had with Steve.

Giving reasons why she is not showing off the man, Sandra said when she suffers a heartbreak, it will only be between her and God.

She wrote: “Love is beautiful. Your girl is in love again. I will hide my baby like palliative cos when I chop breakfast na between me and my God.”

Advertisement
Related Topics:I Have Been Fighting For My Life – Aproko Doctor Diagnosed With Brain Tumor (Video)
Up Next

Why I’ve never given my mother money – Daddy Freeze

Yomi Casual curses those accusing him of being gay