Kwankwaso, others on the block as PDP holds primaries today
Issues, intrigues as PDP holds national convention today
From the 36 states of the country and the Federal Capital Territory, FCT, statutory and elected delegates will gather today for the historic national convention of the Peoples Democratic Party, PDP, in Port Harcourt, the Rivers state capital. 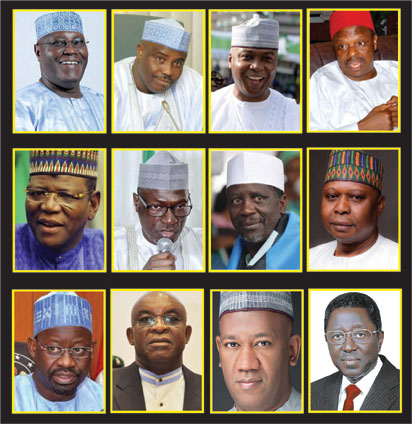 After weeks of disagreement between two major organs of the party, the National Working Committee, NWC, and the Board of Trustees, BoT, on one hand and the Rivers state Governor, Nyesom Wike and some Presidential aspirants on the other, over a suitable venue for the convention, the party finally resolved to settle for Port Harcourt with a commitment to conduct a credible and transparent exercise devoid of rancour and manipulations.

Although the convention will provide ample opportunity for the party to make important decisions, including the ratification and affirmation of decisions reached at its 82nd emergency National Executive Committee, NEC meeting last week, Nigerians home and in the Diaspora would be anxious to know who would be flying the flag of the PDP in the 2019 Presidential election.

But the choice of the party’s flag bearer would not be a walk in the park for the over 3,000 delegates owing to a litany of issues not unconnected with clash of interest associated with party politics. So, what are the issues at play?

He is arguably the biggest influencer in the rank of the PDP today. As governor of oil-rich Rivers state; Wike has literary catapulted himself to one of the national leaders of the party in the past few years.

Famed for his audacious boldness, he is not one to shy away from baring his mind on any issue, no matter how sensitive. So, it wasn’t surprising when last week, he threatened to “teach the party a lesson,” if it succumbed to pressures to move the convention away from Port Harcourt. And despite the criticisms that greeted that verbal outrage, the party eventually settled for the Garden City.

Wike, as the story goes, is rooting for his colleague, the Sokoto State Governor, Aminu Tambuwal who a few months ago ditched the All Progressives Congress, APC, for the PDP to run for the Office of the President in 2019. His preference for Tambuwal and insistence on Port Harcourt, Saturday Vanguard gathered, largely informed the initial rejection of Port Harcourt by some aspirants, who believed the process could be skewed in favour of the former Speaker of the House of Representatives.

But last week in the course of the NEC meeting, Wike not only apologized for his utterances, he also stated that his interest was a credible process regardless of who emerges winner of the sole ticket. This assurance convinced all aspirants to agree to go to Port Harcourt for the big event.

A member of the Convention Planning Committee who spoke to Saturday Vanguard on condition of anonymity said though Port Harcourt remains “a very suitable venue,” for the convention, the aspirants, he argued, would have to demonstrate a deep sense of sportsmanship to make the exercise a huge success.

“What is important is the transparency of the process. Regardless of where the event takes place, a winner will emerge. If you look at the array of aspirants, you will agree with me that these are great leaders in their own right. Yet, elections being what they are, can always pull a surprise. So, we shouldn’t be surprised if a winner, not many expected, emerges at the end of the day,” he said.

Asked if he was in anyway inferring that power brokers could determine who wins the ticket; the party chieftain was evasive but went philosophical in his response.

“I don’t know who the power brokers are but I know that there will be a winner at the end of the exercise. Who will win will win but what I meant is that the opinion of the people may not necessarily tally with that of the delegates. If we fail to arrive at a consensus, it will be up to the delegates to choose for the party and whoever they pick will be acceptable to the party,” he added.

North-West argument
It was Senator Rabiu Kwankwaso, the lawmaker representing Kano Central at the National Assembly who called on the party to settle for a candidate of North-West extraction to stand a chance of beating President Muhammadu Buhari in 2019. His argument was premised on the permutation that the bulk of votes President Buhari is likely to get, will come from that zone and thus, a son of the soil will play the spoiler and cut deep into the President’s support base, leaving him gasping for breath in the South and other geopolitical zones in the country.

Kwankwaso, an immensely popular figure in the North will be up against the likes of Sule Lamido (ex-Jigawa state governor), Ahmed Makarfi (former Kaduna state governor), Attahiru Bafarawa (erstwhile Sokoto governor), incumbent Sokoto governor, Aminu Tambuwal, Tanimu Turaki (former Special Duties Minister) and Datti Baba-Ahmed, an ex-lawmaker, all from the zone.
Kwankwaso’s ability to garner enough votes in the South, North-East and North-Central is up there for debate even as an ex-Minister in the President Goodluck Jonathan administration says the delegates should look in the direction of Turaki or Makarfi in the event that the party settles for North-West.

His words:”I don’t want to speak for the delegates on this. To make complicated issues less difficult, we advocated the micro zoning of the Presidency to one of the geopolitical zones in the North but we were overruled.

“The only thing I can say here is that Makarfi did a lot as governor of Kaduna state for eight years. Under his watch, the perennial violent clashes in that state were well handled. As chairman of the PDP National Caretaker Committee, he surpassed the expectations of many by running a popular administration. He is worthy to fly the banner of our party.

“Turaki for me is a lovable human being, an intellectual and a great leader. His loyalty to the party is unquestionable and he has the energy to bring about a turn around in our governance system, if given the chance,” he stated.

Peace accord
On Wednesday, the PDP publicity scribe, Kola Ologbondiyan, told our correspondent that Presidential aspirants on the platform of the party have all resolved to sign a peace accord which will bind them to stick with the party regardless of the outcome of the primary election.

Good as that may sound in the ears of the leadership of the party, there are genuine fears that some of the contestants may seek alternative platforms particularly if they feel that the exercise falls short of transparency.

Considering the argument for and against the choice of Port Harcourt; it is incumbent on the Governor Ifeanyi Okowa-led National Convention Planning Committee to walk its talk by conducting a truly free, fair and credible primary as it has promised.

Electing most eligible candidate
Perhaps, the biggest challenge before the delegates is Gordian knot of unraveling who among the 13 aspirants has the political visibility to garner enough votes across the country to win the 2019 election.

Will it be Atiku Abubakar, an experienced politician and perhaps the most prepared, considering the policy alternatives he has been churning out in the past few months? Or Senate President, Bukola Saraki, who says Nigeria deserves a digital President in 2019? In David Mark, the delegates who come across a bridge builder of sort who has been around for years, armed with a vast network of associates in civilian and military circles. In Ibrahim Dankwambo, the delegates will face a financial manager with incredible record of service in both public and private sectors. Will they choose him?

Turaki, believed to be enjoying the support of former President Goodluck Jonathan is without baggage and he is seen as a bridge between the old and the young. Baba-Ahmed holds a PhD in Economics and has promised to revive the economy within a short period. Regardless of the choice they make, winning the 2019 Presidential poll will be an herculean task not only for the PDP but for the ruling APC as well.

Today, PDP is expected to elect a strong candidate to challenge President Muhammadu Buhari in 2019 elections. Atiku, they say is the most prepared. And this may be his last chance considering his age.

Can he get the ticket to have a shot at the Presidency? Tambuwal, Saraki and Kwakwanso seemed to be on the block with him few days ago before Makarfi appeared to be gathering momentum in the last three days. It’s open. They all have their chances but one will emerge today and the real race to Aso Villa will begin.

Related Topics:2019: Who challenges Buhari ?
Up Next