There was drama at the Ekiti State Government House on Sunday as outgoing Governor Ayo Fayose wept profusely while vacating the state’s number-one seat. 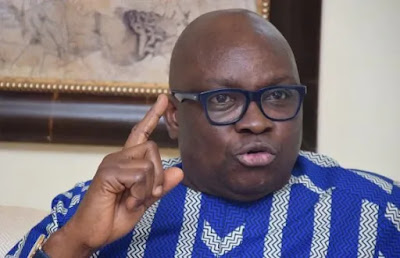 Fayose shed tears shortly after attending a thanksgiving service to mark the end of his tenure held at the Government House chapel.

The governor betrayed emotion as he made for his official vehicle on his way to catching a flight at the Akure Airport.

He was believed to be on his way to Abuja in readiness for an appearance at the head office of the Economic and Financial Crimes
Commission (EFCC).

As the thanksgiving service ended at about 11.00 am, tears had welled up in the eyes of the governor who sauntered towards his Lexus SUV.

His wife, Feyisetan, who sensed that her husband was weeping, moved closer to him and consoled him.

After being consoled by his wife, Fayose bade farewell to few aides and other admirers who were watching the drama.

Fayose’s voice was laden with emotion as he addressed the congregation.

The outgoing governor said he was leaving the state number-one seat a contented man.

Mrs. Fayose assured that her husband would come back to Ekiti a triumphant man.
She said: “We are coming back, I don’t know how but I have 200 per cent assurances.”

Related Topics:Fayose Weeps As He Vacates Ekiti Govt House
Up Next