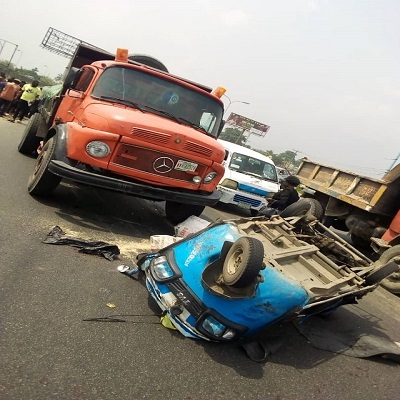 No fewer than ten persons were reportedly injured in a multiple road crash at Nicon Junction, Nnamdi Azikiwe road, Abuja.

According to witnesses, the incident happened around 1:20pm on Sunday.

Details were still sketchy as of the time of filing this report, but a witness, Fred Omale, told out correspondent that it involved a Toyota, a Camry and a Mazda.

The witness said he counted eight people on the floor injured.

Omale said: “I counted eight people on the floor when I came around but am sure if any one “.

A large crowd of onlookers was seen at the scene of the accident.

All efforts to officially confirm the incident from the FRSC were futile as the spokesman of the corps did not respond to calls nor text messages.

Advertisement
Related Topics:10 injured in Abuja multiple accident
Up Next