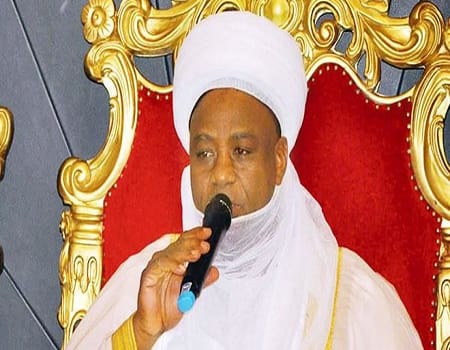 The Sultan of Sokoto, Muhammadu Sa’ad Abubakar has dismissed the notion that the 2023 election is a make-or-break for Nigeria, stating that it is only God that would decide the fate of Nigeria.

The Sultan who is the Co-Chairman of the Nigeria Inter-Religious Council (NIREC) stated this on Tuesday during the NIREC 4th Quarter 2022 Meeting held in Abuja.

Also, the President of the Christian Association of Nigeria, and also the Co-Chairman of NIREC, Archbishop Daniel Okoh said questions and doubts are being expressed about Nigeria’s capacity and political will to conduct free, fair, credible and peaceful elections.

The Sultan while making his opening speech, said a lot of people make comments about 2023 as a make-or-break election for Nigeria, “and I don’t believe in that, I refuse to believe in that. It is just an election that people will go out, cast their vote in peace and whoever emerges the leader will be the leader of this country”

“So, I don’t believe it is a make or break election, and we must not play into the hands of those elements of Nigeria who keep on parading those issues as this is the election that will decide the fate of this nation, only Allah decides the fate of this country”.

He charged politicians and electorates to go out and campaign peacefully and whenever the elections come up, they elect the leader they think is best for Nigeria and the rest would be left to Almighty Allah.

“We must come together, put ethnicity and religion behind us and face the reality of life. Whatever we do, we must fear almighty Allah because he is going to ask us and definitely we will only to him”, he added.

The CAN president during his address at the Meeting said while Nigeria prepares for the polls in 2023, serious questions and doubts are being expressed about the country’s capacity and political will to conduct free, fair, credible and peaceful elections.

He said since independence in 1960, violence and electoral irregularities have become constant features of the process of electing the country’s leaders and the most worrisome point is always the number of deaths often recorded in the process.

“Politics of corruption, intimidation, exclusion and violence are now regarded by some elements in the society as necessary weapons of political victory in our country. This ugly trend robs Nigerian voters of the opportunity to freely choose their leaders.

“As we navigate the process to the 2023 general elections, the world is watching to see if there will be a relatively peaceful transition, or a repeat of the familiar ugly past always filled with pre-and post-electoral violence.

“As a faith leader, I am convinced that this ugly history of pre-or post-electoral violence will not be repeated if we all decide to halt the trend through strategic conversation that appeals to the conscience of the political class like we are doing here today.

Archbishop Okoh further stated that other issue is the lack of transparency in the electoral process, and the ungodly alliance of some security agents with the political class to subvert the process and confer undue advantage on one political party against the others.

“All this makes the process tense, frightening and disenfranchising to the weak and feeble-minded. There is no doubt in my mind that the 2023 general elections hold the key to our national renaissance, freedom from insecurity, economic subjugation and all other social vices that have dotted our ugly past.

He said the need for peaceful and credible elections can never be overemphasized, bearing in mind that the opposite has dire consequences for the country’s collective aspirations.

“Electoral violence leads to the death of many people particularly the youth who are the bedrock of tomorrow’s nation-building. Violent elections scare away many people who would have loved to participate in politics and offer their expertise in rebuilding our nation”, he added.

On his part, the Secretary to the government of the Federation (SGF), Boss Mustapha expressed delight that the meeting comes at a time when the nation is preparing for its general election which is expected to be free, fair and credible that would eventually translate to national rebirth.

He commended the leadership of NIREC for their support in stabilizing the nation and charged them to do more especially as the country is preparing for its general election next year.

He said President Muhammadu Buhari had promised Nigerians and the international communities of overseeing a peaceful and credible election which will usher in the new government in 2023.

Advertisement
Related Topics:2023 Election Not A Make Or Break For Nigeriafair election ―  CAN President.Says Sultan  •there are doubts about free
Up Next