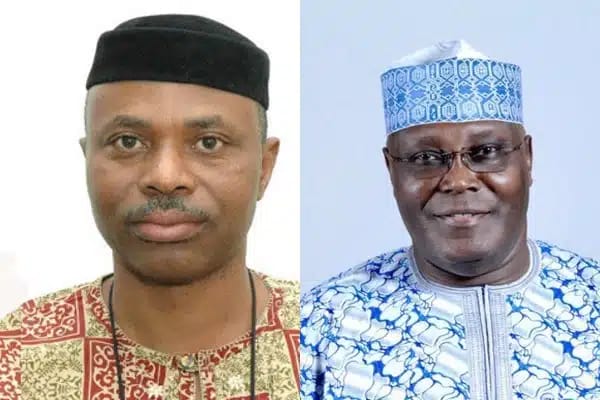 Some loyalists of former Ondo Governor Dr Olusegun Mimiko are said to have betrayed him by attending the People Democratic Party (PDP) campaign rally held on Wednesday in Akure, the state capital.
The former governor, who is a PDP chieftain, was not present at the rally, but some of his supporters were seen there to support the party’s flag bearer, Atiku Abubakar.

Former Deputy Governor Agboola Ajayi, a former Chairman of the PDP, Engr. Clement Faboyede, and others who had defected from the Zenith Labour Party were among those seen at the event.

Some speculate that the presence of some of Mimiko’s allies at today’s PDP rally indicates a split in his camp over support for Atiku.

The former Governor is a member of the PDP G5 Governors’ Integrity Group, led by Rivers State Governor Nyesom Wike, who has continued to call for the resignation of the party’s National Chairman Iyorchia Ayu in exchange for a person of southern descent.

It should be noted that Mimiko declined to join the Ondo PDP Presidential Campaign Council in October.

“For the avoidance of doubt and to set the record straight, Dr Mimiko is unwavering in his commitment to the principle of equity, fairness, and justice through which he believes a credible push for a PDP victory is possible,” the former governor was quoted as saying in a statement at the time.

“He wholeheartedly agrees with his colleagues and other PDP stakeholders, as well as the majority of Nigerians, that the PDP structure must reflect Nigeria’s diversity if it truly wants to unite a visibly divided country.”

When Track News contacted Mimiko’s media aide, John Paul Akinduro, to comment on the situation, he told Nation that he was not aware of any PDP rally in the state.

Meanwhile, Atiku promised at the rally that if elected president next year, he would repair all federal roads connecting Ondo State to other states.

The PDP presidential candidate revealed that his decision to launch his Southwest campaign in Ondo State is intended to thank the people of the state for their massive votes for him in 2019.

“We will never forget you,” he said. We will set aside sufficient funds to empower the youth. That is why we stated in our policy document that we will. Set aside $10 billion for youth.

“We will increase education funding.” The APC is unconcerned about your future.”

“Ondo is a PDP state,” said the PDP national chairman. The PDP is returning to power in Ondo State. We, as a party, must band together. You must all work together to give us the most votes. The PDP’s return at the national level is the PDP’s return at the state level. Atiku is your brother-in-law. The country is in disarray. You’ll need an experienced leader, someone who’s been there before. He will bring the country together and make life better for everyone.”

Bayelsa flood: We have delivered on our promise Azikel groups tackles Diri’s aid